This summer our family decided to combine a number of short trips into one long weekend of adventure for the kids, who range in age from 11 years old to 2 years old. The first stop was Moominworld, a theme park located in the sunny town of Naantali on Finland’s south-western coast. We’d also stay in the luxurious Naantali Spa, take a cruise from Turku to Åland Islands with Silja Line in the Archipelago, and visit the Åland Islands. 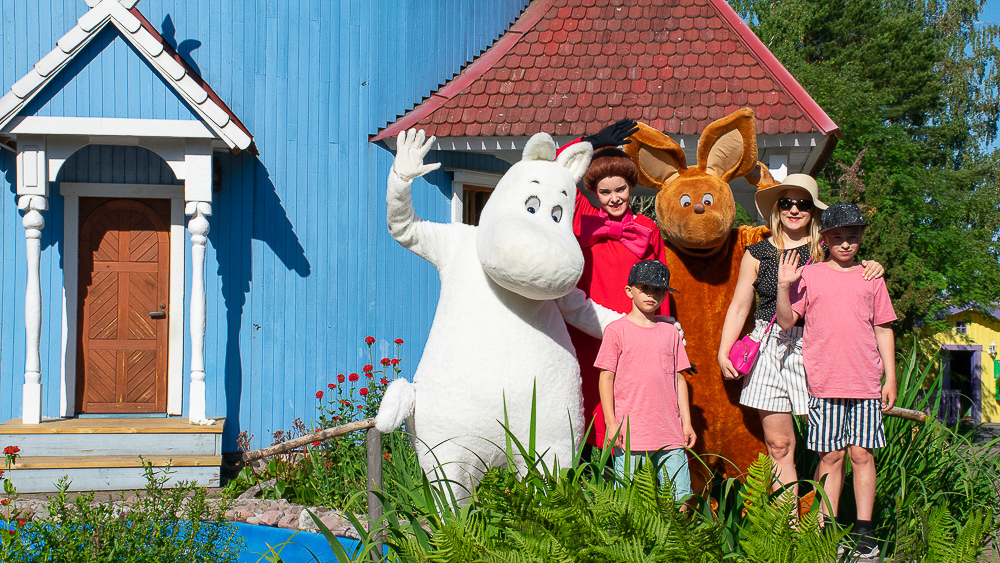 Introduction to the Moomins

For those who haven’t had the pleasure of growing up with the Moomins, they are a family of hippo-shaped trolls who reside in a tall blue tower in Moominvalley. Created by the talented illustrator, artist, and writer, Tove Jansson (a Swedish-speaking Finn). Between 1945 and 1993 Tove published 9 books, five picture books, and a popular comic strip. The Moomins have also been the basis for numerous tv series, shown to audiences in Japan, Germany, the Netherlands, Britain, Austria, France, Sweden, and even the USSR.

The Moomins are the central characters, a family of three, with a supporting cast of lovable and mischievous friends and allies, with whom they share their adventures. Moomintroll, the son, is the main character, along with his unflappable mother Moominmamma, and his oft times eccentric father, Moominpappa. Other key characters include the Snork Maiden (Moomintroll’s girlfriend), Snuffkin (his best friend and perennial wanderer), Little My (a tiny tomboyish girl who loves calamity), and Sniff (a kangaroo-like creature that lives with the Moomins, and is very timid).

Since the 1950s the popularity of the Moomins has steadily increased, and today the theme park named for the series is one of Finland’s most visited tourist attractions in summer. 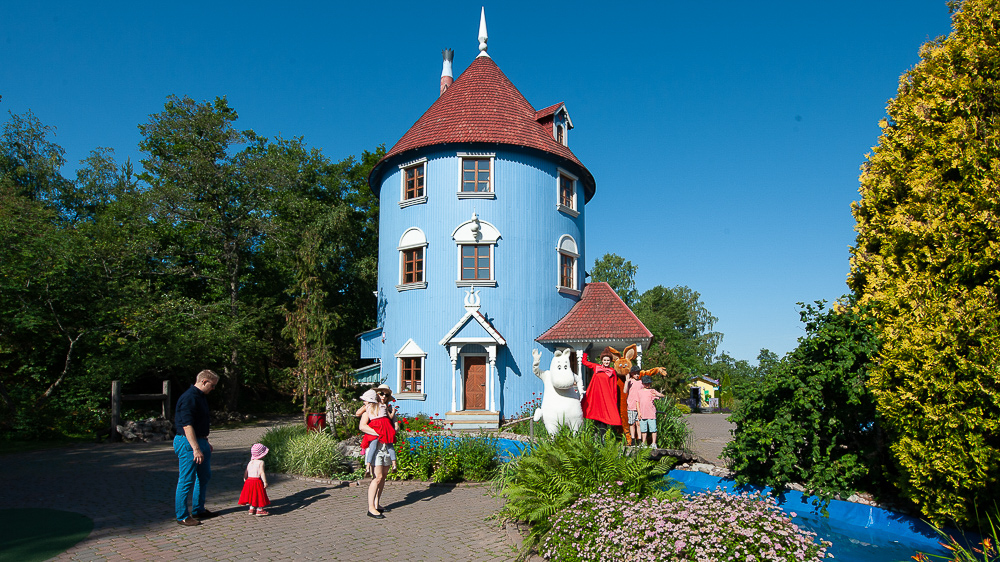 We packed up the car early in the sunny morning, although not quite as early as planned which is usually the case when you have to negotiate four children into a car. The distance from Helsinki to Naantali is a little over 180km, or a little over two hours driving. We left the car in Naantali, then strolled through the small town, past the harbour restaurants, and on towards the wooden bridge that links the Moominworld island to the mainland, and showed our tickets at the entrance.

The Island Kingdom of Moominworld

Moominworld fully occupies a whole island off the coast of Naantali, and would be a delight to explore even if there wasn’t some new attraction or activity around every corner and up every hill. Pathways lead all over the island, crisscrossing on occasion, circling and intersecting, but always well signposted. The island itself is a hilly, forested affair, but not so big that getting to all the attractions becomes tiring. The hills and woods make it ideal for hiding various different elements from the beloved books, for visitors to suddenly arrive at as they walk the forest paths. The nature here is typical of the archipelago, which just adds to the experience of making your way around. 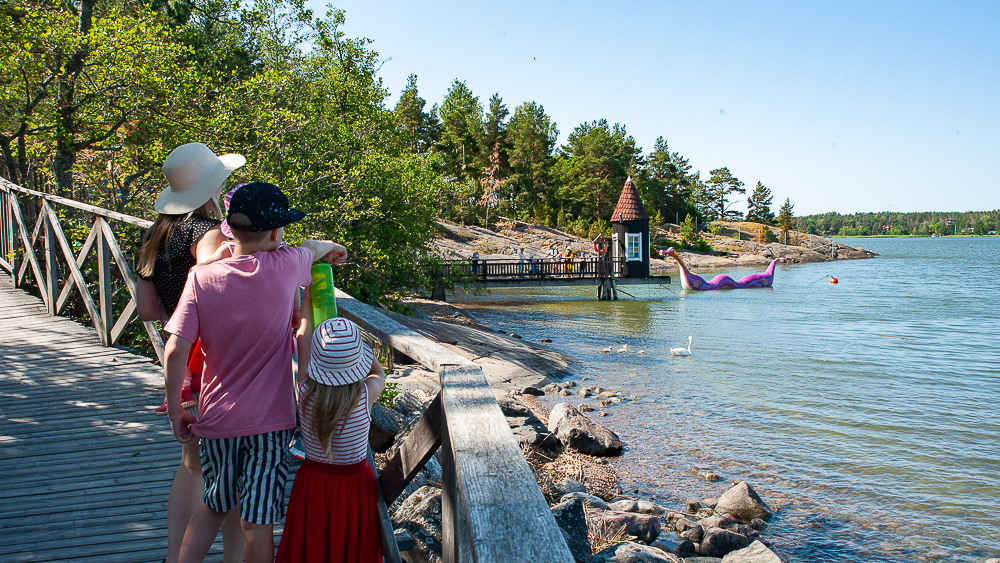 As we arrived at the entrance we picked up a map, which the older boys immediately took command of, as is usual, and they would be our main navigators for the day. We made our way directly to the iconic Moominhouse, a fairytale tower of light blue with four levels, all of which can be visited. Moomintroll, Sniff, and Little My were outside chatting with kids and having their photos taken with countless excited kids, and we took some of our own too. We explored the house; on the ground floor there was the kitchen and dining area, above that the Moomin family’s bedrooms and the guestrooms, and above that lay Moominpappa’s study where he would go to write his memoirs. I never did find out what was lurking in the basement. 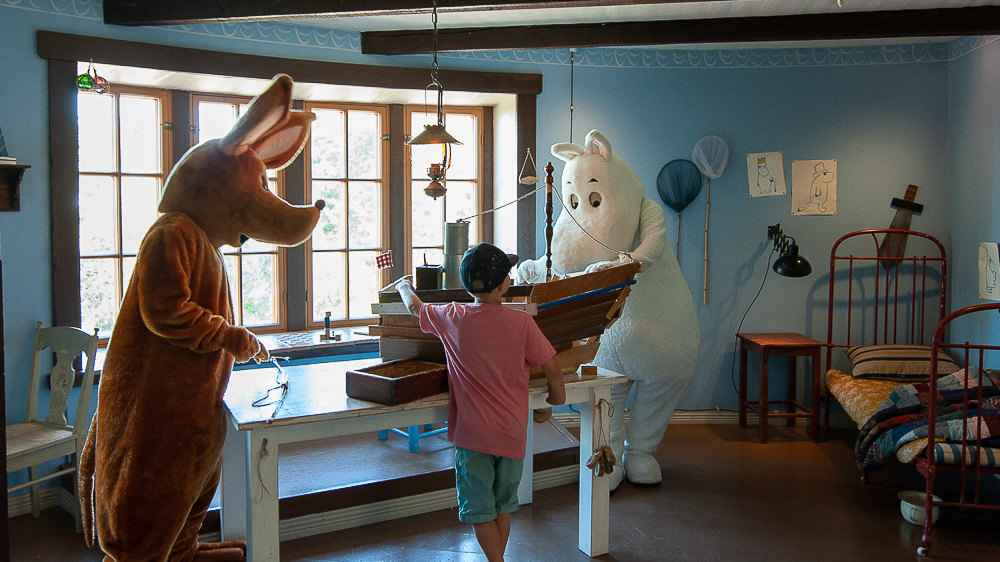 A World of Hugs!

Back outside, and it was time for more hugs. For Finnish kids, hugging a Moomin is akin to sitting on Santa’s lap, a special and magical moment that they’ll long remember. In this our children have much in common with the many Japanese tourists who were also visiting Moomin Valley; adults of all ages were smiling hugely as they took their hugs, either taking selfies at the same time or swapping places with their friends who held the camera. If anything best expresses the friendly atmosphere of this island paradise, it is the ease with which adults can be kids again for a moment, shamelessly!

Next to the Moominhouse there was a small stage where Moomintroll and Little My were putting on a short musical show, and the kids watched enraptured. As we stood a little to the back, Moominpappa and Moominmamma came out to join the audience, watch the show, and, inevitably share more hugs with the happy crowd.

As the show ended, the boys got out the map, and began to guide us to the nearby bathing hut on the Moomin’s own swimming pier. The view out over the archipelago as we came down the path was stunning. For there, bobbing in the sea next to the pier, was Edvard the Booble, a magnificent purple sea dragon, described in the books as the world’s largest animal after his brother. 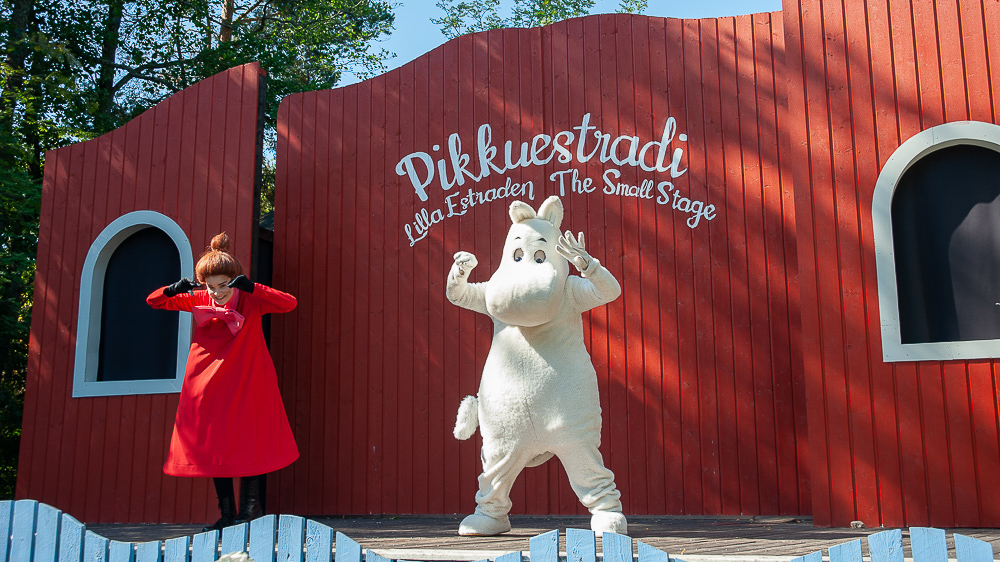 We walked back towards the Moominhouse, where the Moominvalley Fire Station provided the next adventure for the kids, the alarm system and the equipment particularly interesting them. Once again our children consulted the map, and decided that our next steps would take us along the Fairytale Trail. As we followed it we came across the a slightly run-down cottage, home to the Wild Witch and her delightful granddaughter Alice, where the Witch herself was huddled over a cauldron, offering us a taste of her snot soup. We politely declined, and passed along to the labyrinth, a wooden construction that was great fun to escape from.

Having all found our way out of the labyrinth, we came to a rushing brook which we crossed via a suspension bridge before arriving at the house of the Groke, the most terrifying creature in the Moomin books. There was a slight chill in the air, which the kids correctly assumed meant the Groke must be home, so they snuck in to see if they could get a glimpse. Muffled screams, and a rush of feet to the exit – they’d spotted him! Next up was the Cave of the Hattifatteners, the most mysterious beings in the park – ghostly looking things that become electric during thunderstorms. 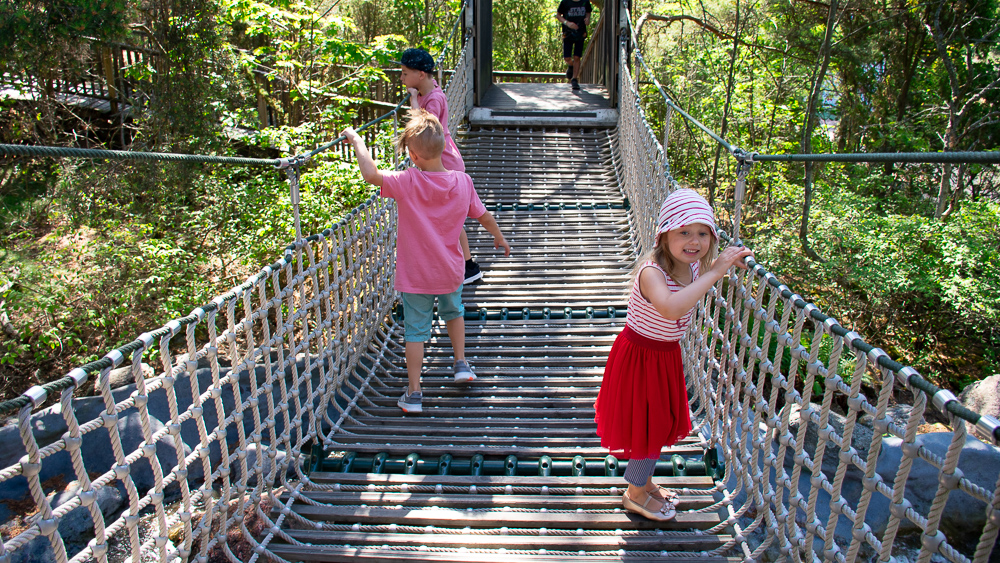 By now we had developed a bit of an appetite, so it was time to stop for lunch. There were plenty of choices available, from Pizza & Pasta to the Burger Bar, but we settled on Mamma’s Kitchen as its buffet had enough choices to keep everyone happy, not always an easy thing with four kids. Sufficiently sated, we went into the nearby Moomin Shop, to browse all the souvenirs. Our smallest, a girl, went straight for the shelves with the plush toys where she grabbed a Snork Maiden, her new favourite Moomin.

There was still one side of the island we had yet to explore, so we renewed our explorations to discover the rest of the attractions. Soon we came to Whileaway Park, where a number of hammocks were stretched between trees, inviting visitors to rest and relax awhile. As tempting as they looked to me and the husband, the kids just wanted to see if they could climb in and out without tumbling, so our time there was short. We continued along the Barefoot Trail, taking our shoes off, to make our way barefoot over the sand and smooth cobblestones, into Snufkin’s camp where the wandered was relaxing against a tree. The kids chatted with him a while, before continuing to Moominpappa’s boat, where the kids had fun exploring and using the big slide on it. 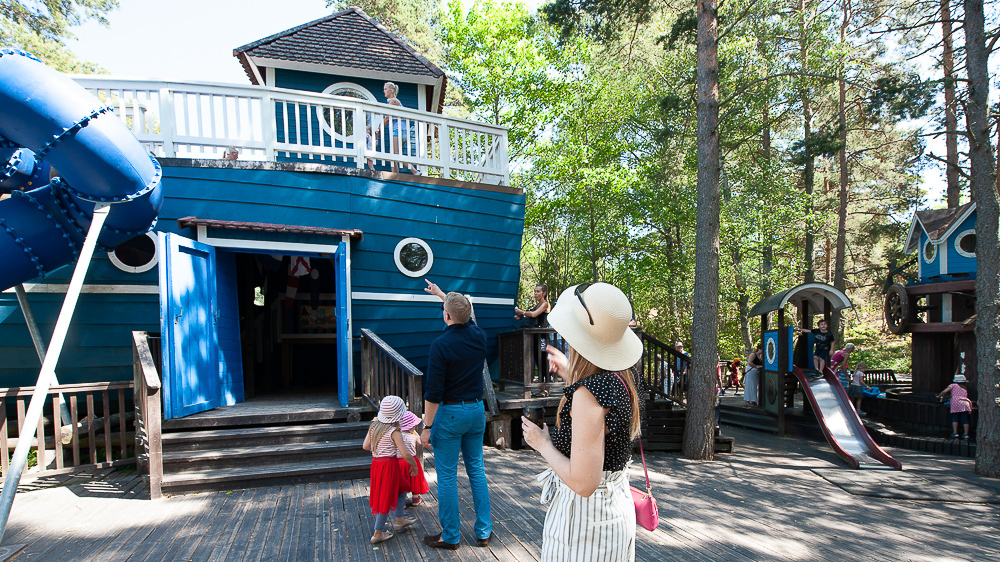 A Final Fond Farewell to Moominworld

We had come to the end of our time on the island, so with four tired kids we made our way back to the car, to make the short journey to Naantali Spa where we would spend the night. Moominworld had been perfect, its a unique theme park that charms and entertains in equal measure, and the characters from the series interacted wonderfully with all the many visitors, both young and old. It’s location next to the idyllic seaside town of Naantali, itself one of Finland’s finest looking towns, is perfect.

We could have spent longer, and perhaps when we revisit in a couple of years we’ll spend a few days here. In Moominworld there were plenty of activities we missed, like the performances at Theatre Emma, and Stinky’s thrilling clue mystery, and it is a family destination that we would heartily recommend to all families – even those not well versed in the Moomin mythology!

Other destinations we visited:

Lintula Apartments – Peipponen, apartment with air-conditioning and sauna for 2 adults and 3 children

Lintula Apartments – Peipponen, apartment with air-conditioning and sauna for 2 adults and 3 children 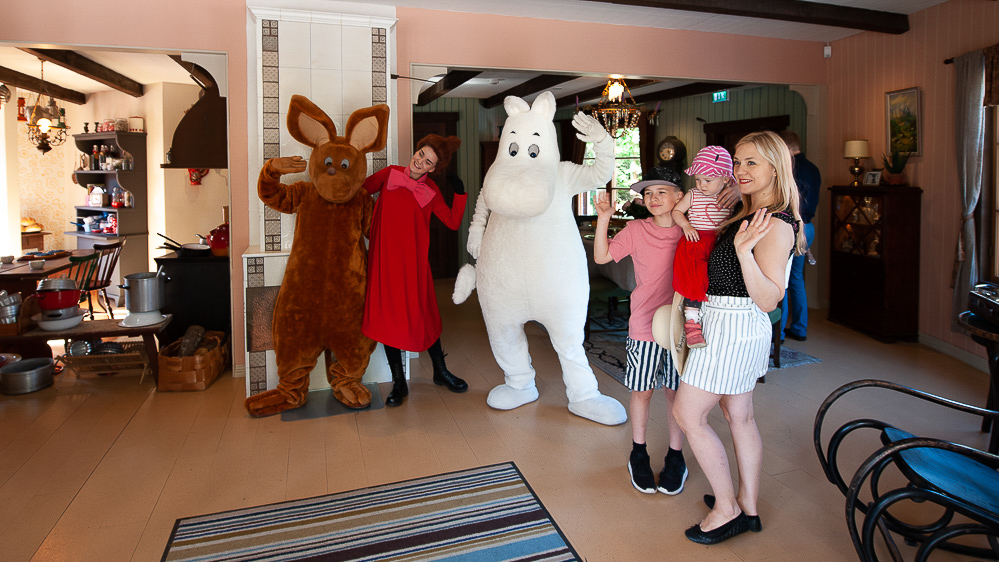 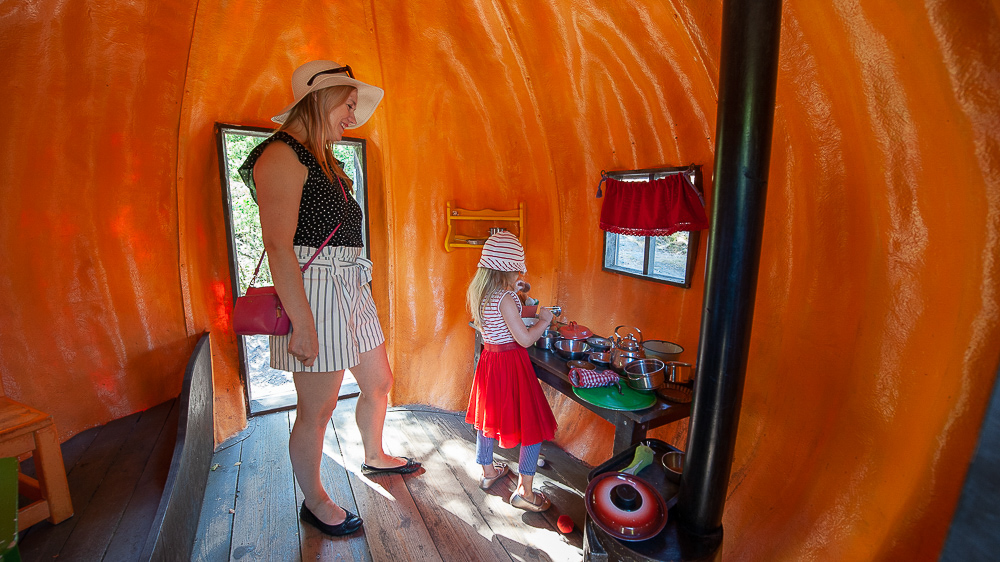 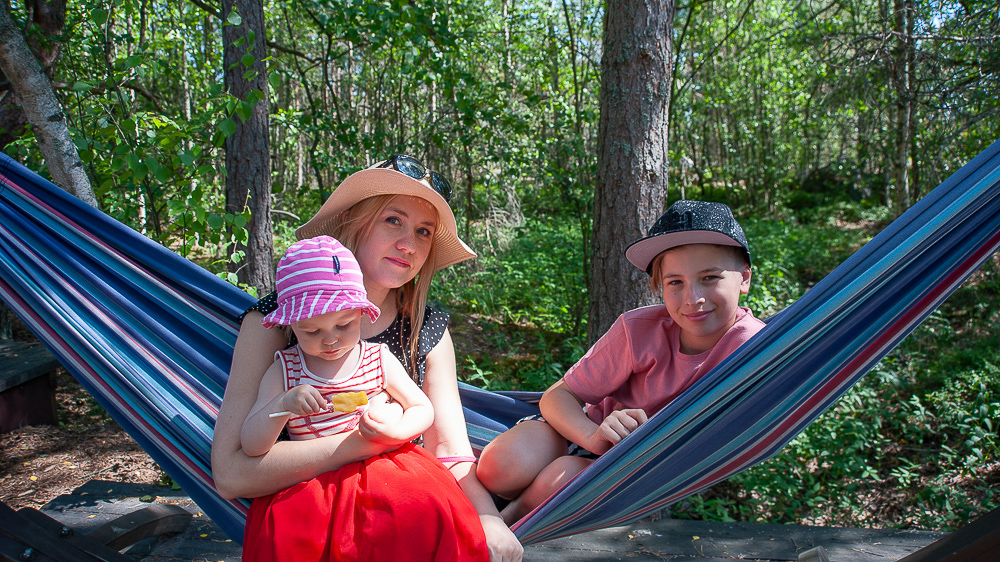