My girlfriend and I thought we could spend some quality time away from the city together, and the idea of a short cruise came up. A quick visit to the Silja Line website gave us a bunch of choices: they offer cruises that link up some of the major cities on the Baltic Sea – Helsinki, Stockholm, Riga, Tallinn, and Åland’s capital Mariehamn. Regular visitors to Tallinn, we decided a trip to the Swedish capital, Stockholm, would be perfect for us. A look at the schedule showed that we could leave on Saturday on the Silja Symphony, and be back in Helsinki by Monday by noon, with around seven hours for us to take a look around Stockholm’s historic section, Gamla Stan, with time for a drink or two. 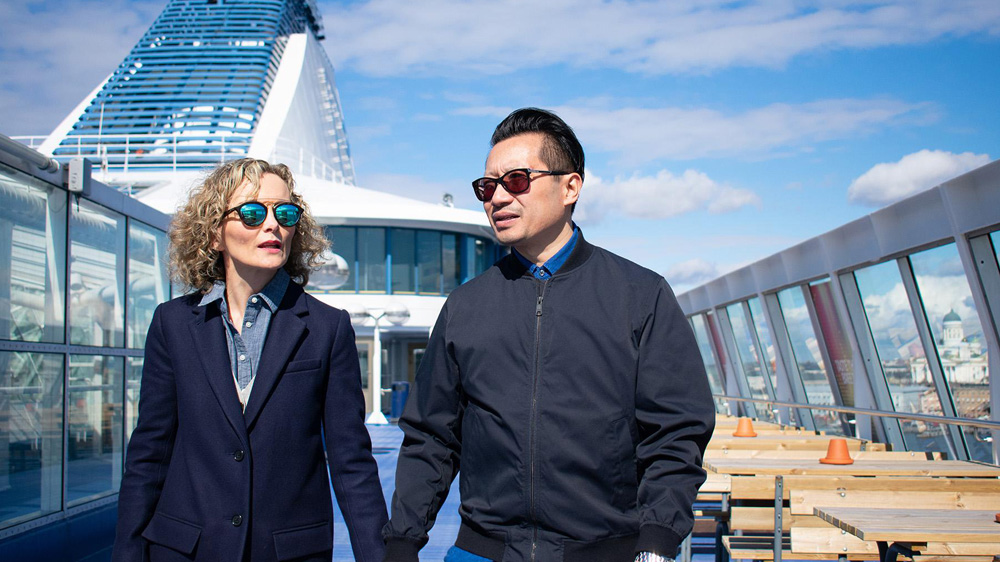 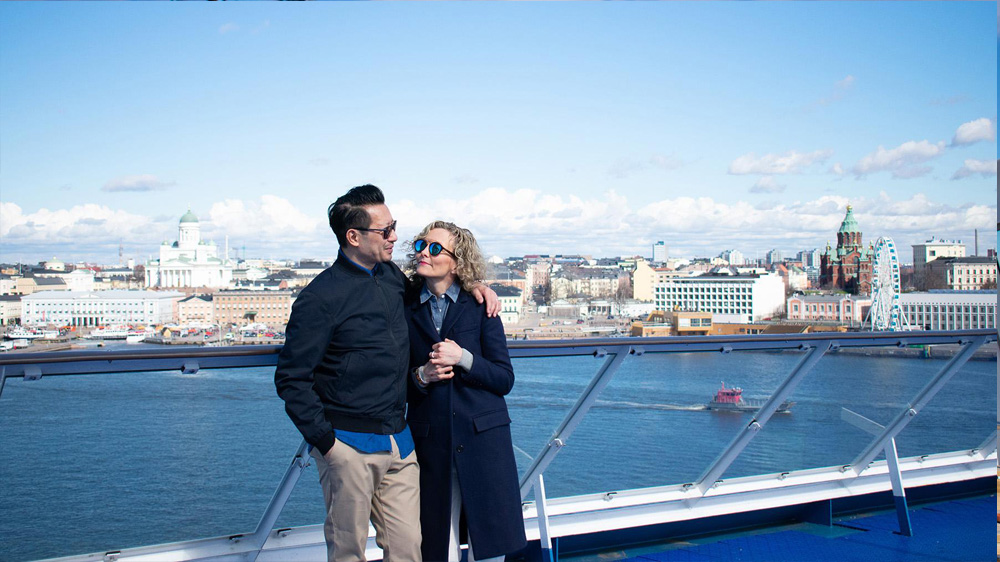 Silja Symphony is a regular visitor to Helsinki, as it can seen docked at the Olympia terminal near the market square every second day, and it has always looked an impressive sight, sleek and massive. Browsing the Silja Line website I discovered that it was as equally impressive on board as it was to look at: there are over 950 cabins, with a selection of 10 types to choose from; the ship has no less than 7 different restaurants, and 5 different bars, including a casino and nightclub; live entertainment can be enjoyed throughout the journey, and all of it is free; there is a huge duty-free shopping area, and more shops on the ship’s promenade; there is a small spa on the top deck, with saunas, pools, a jacuzzi, and a bar; and there is a special area just for kids to play in. All in all it seemed perfect for us, so we booked our cabin through the easy online forms and were set to go.

As mentioned, the Symphony was docked at the Olympia terminal in Helsinki’s South Harbour, close to the famous market place, and a tram duly delivered us to the doors in plenty of time. Departure was set for 5pm, but we boarded early so as to get a bit of exploring done after we unpacked in our cabin. We had chosen the Commodore suite, which at 25 sq metres was spacious and airy, and also had excellent sea views. We were told that there was a separate Commodore lounge with its own bar and sauna, exclusive to guests in the Commodore cabins. Commodore lounge served complimentary tea, coffee and pastries, and that the hosts there would take care of table reservations and anything else we needed. 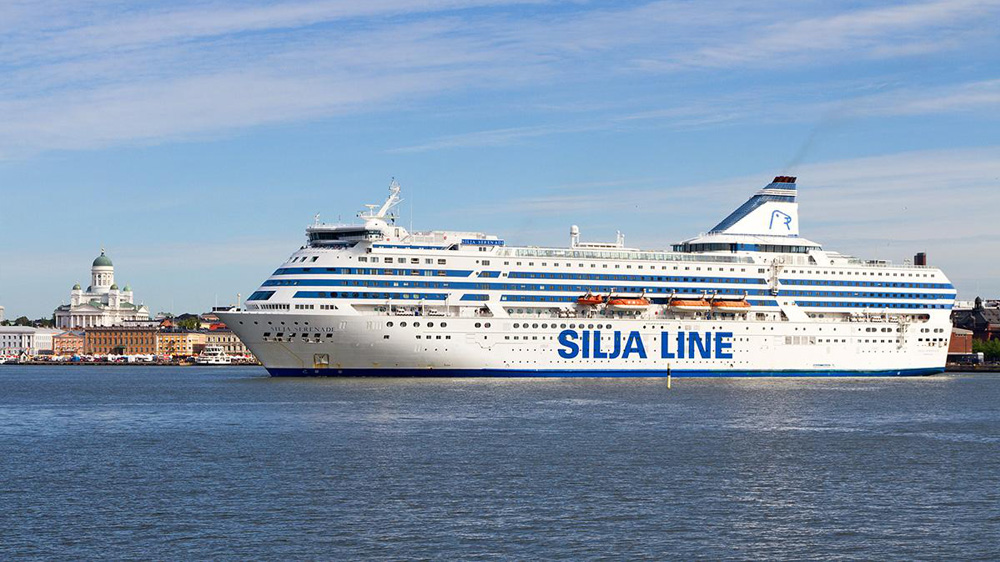 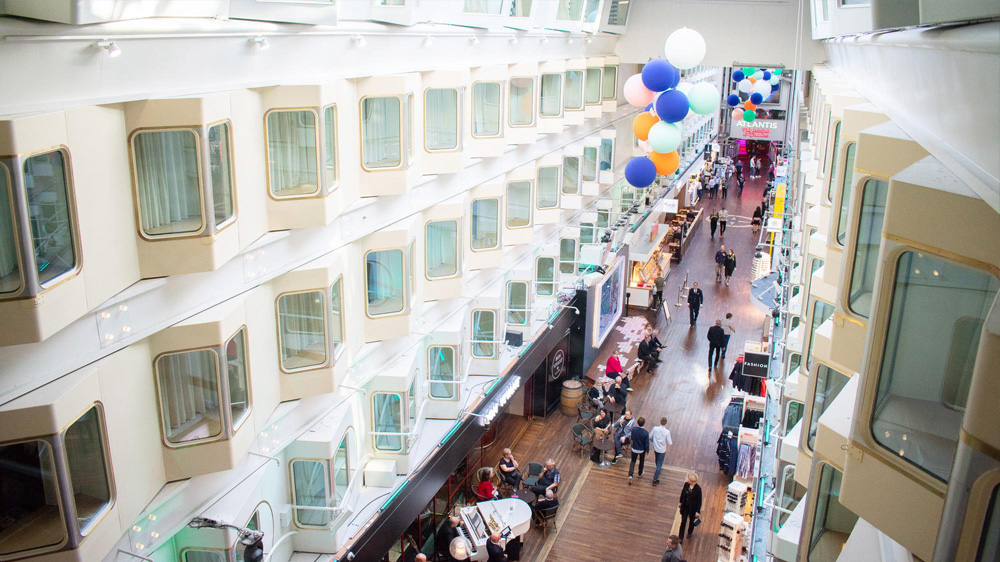 Jazz on the Promenade

Delighted that the cabin was everything that the online photos promised we set off for the promenade, which is where most of the ship’s action takes place. A three piece jazz band was playing by the Bon Vivant Restaurant on the Promenade, so we sat at a table nearby, ordered our wine, and settled back to enjoy some old classics as we watched the flow of people passing by.

A little before the ship left dock we decided to browse the shops on the promenade, noting the numerous brand names and famous Finnish designs on offer, with the ubiquitous Moomins well represented. The selection was fantastic and we thought that perhaps we’d pick up a few things on the journey back. 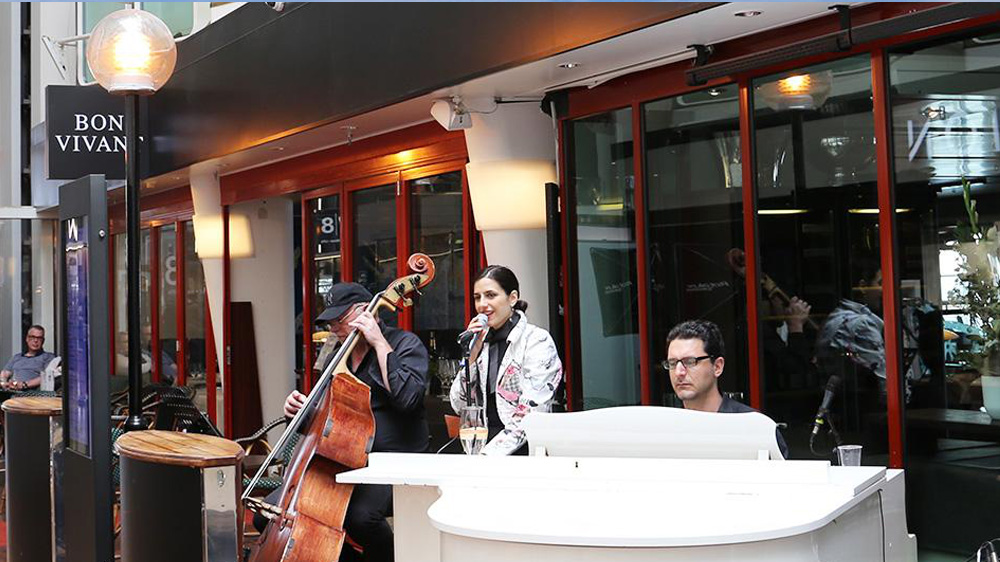 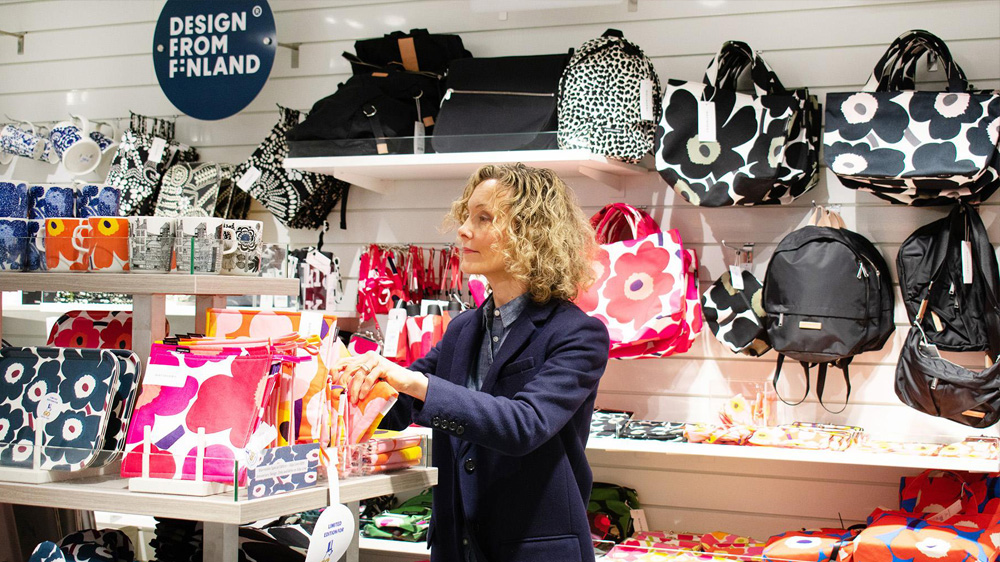 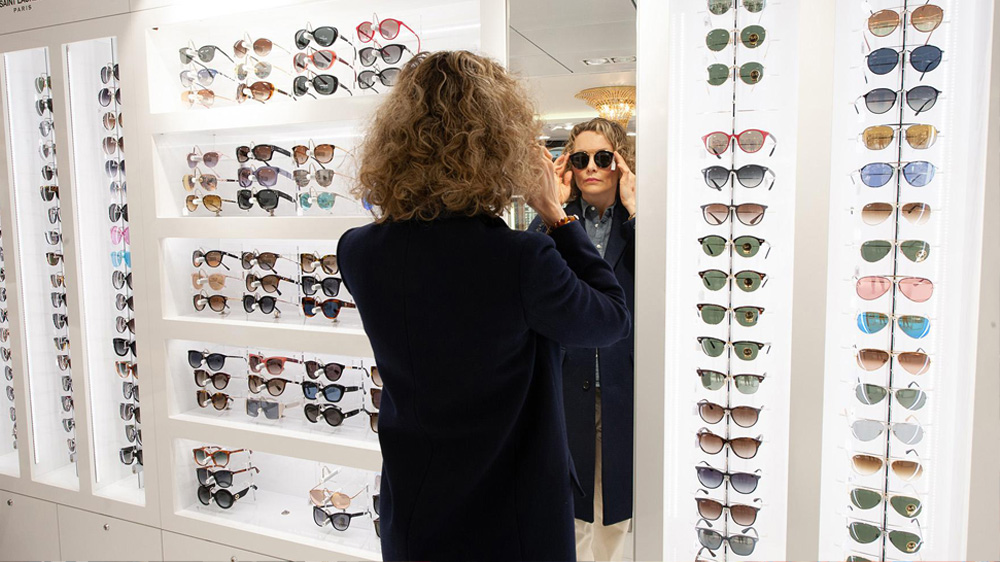 As we felt the initial rumblings of the ship beginning to leave, we headed to the Atlantis Bar at the front of the ship, where we could get a drink and enjoy the views as we cruised past the many islands and skerries in the Helsinki Archipelago. It was a lovely sunny day, the weather absolutely perfect for getting some touristy snaps of the city and the numerous islands in the archipelago, including the impressive Suomenlinna Sea Fortress, as we passed. 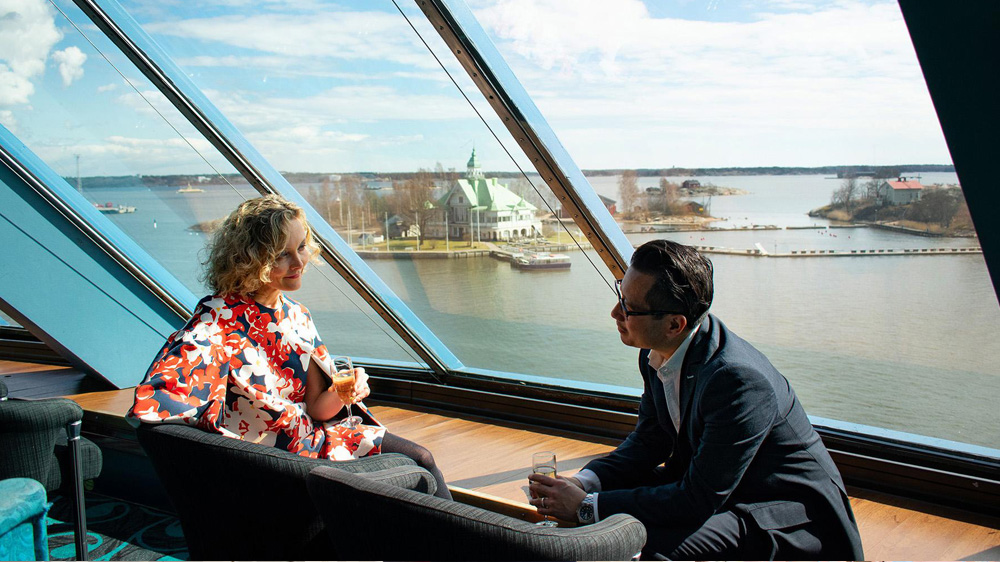 A Taste of the Mediterranean

Soon after, our appetites sharpened by sea breezes, we strolled to Tavolàta Ristorante Italiano, a stylish Italian restaurant with an excellent menu that we had booked in advance. The waitress that served us was the epitome of classy service, answering our many questions and helping us choose the perfect wines to accompany our different courses. We were in no hurry, and were never rushed no matter how we dawdled over our desserts and final aperitif which certainly enhanced the dining experience.

It was getting late when we finally left Tavolàta, but we thought we’d take a quick look at the Atlantis Nightclub & Casino before retiring. Located on decks 7 and 8 in the front of the ship, Atlantis is the liveliest part, with entertainment provided by live bands, and bartenders skilled in the fine arts of cocktails. Those would wait until the return journey, we were already a little tired and intended to do quite a bit of walking once we arrived in Stockholm in the morning. 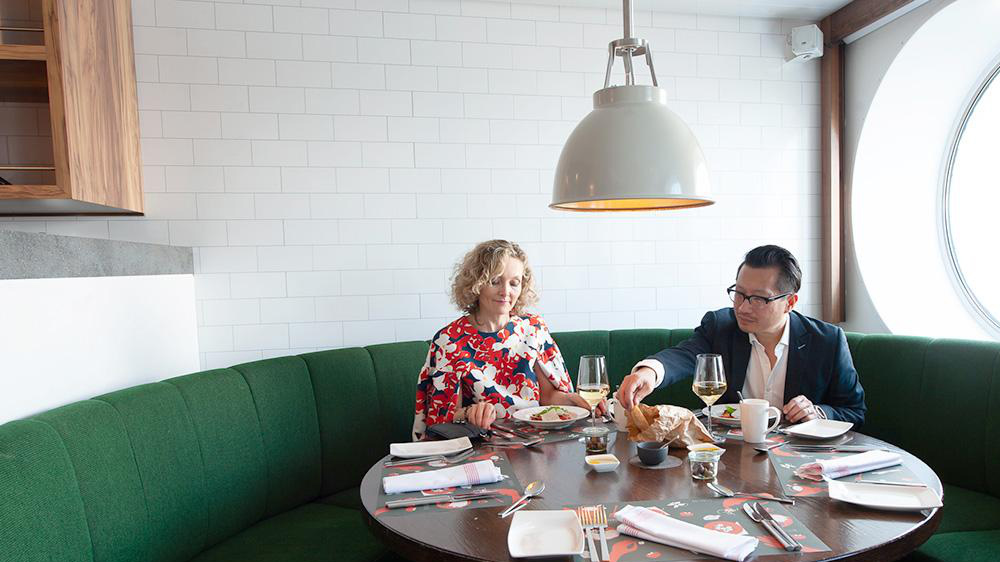 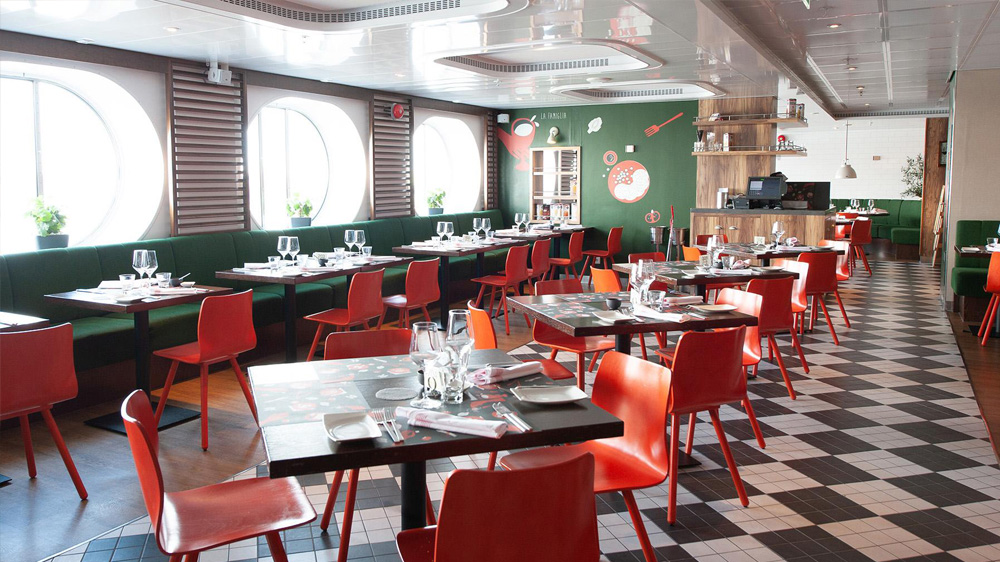 After a comfortable sleep in our luxury cabin we descended to the deck immediately below the Promenade to enjoy the special breakfast in Bon Vivant, a fine dining restaurant, which was included in our Commodore package. Had we not been in a luxury Commodore cabin, then we’d certainly have tried the Breakfast Grand Buffet, where a massive selection of Scandinavian foods and breads, both hot and cold, is provided daily. 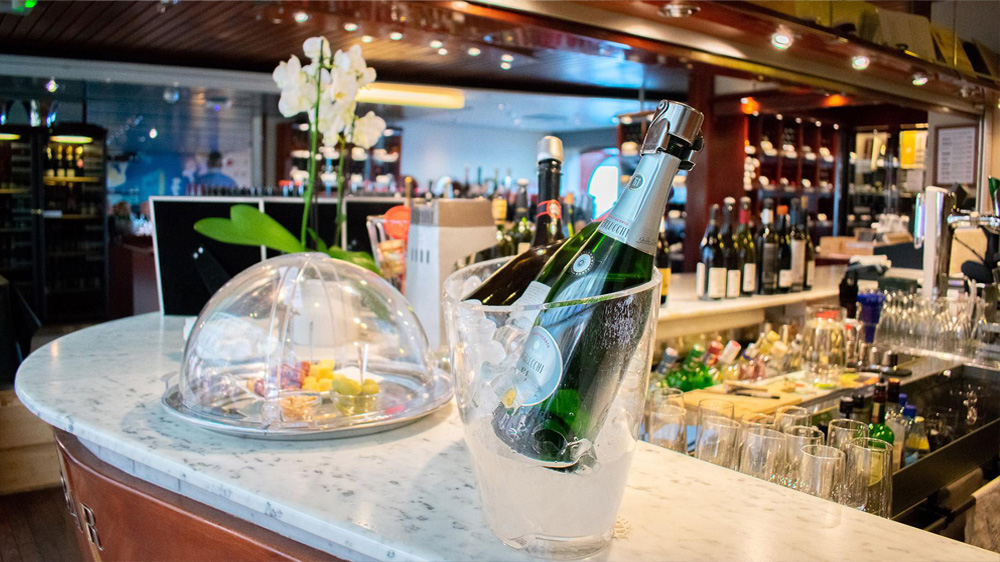 When we disembarked we found a bus that carried us directly into the city centre, and from the central bus station it was a 15 minute walk to Stockholm’s famous Old Town, Gamla Stan. One of the best preserved medieval city centres in Europe, this is where Stockholm was founded back in 1252. This pedestrian-friendly area is a living museum, its narrow, winding cobblestone streets packed with restaurants, cafés, bars, and shops, and its buildings painted in a multitude of shades and tints. There are a number of gorgeous churches, including Stockholm Cathedral and my own favourite, Riddarholmen Church.

One of the most visited sites is the Royal Palace, one of the largest in the world with over 600 rooms. In addition to the various reception rooms, we also visited Gustav III’s Museum of Antiquities, the Tre Kronor Museum, the Treasury, and the Armoury. After admiring the elegance of the Palace we continued on to Stortorget, the oldest square in Stockholm, and one of the most photographed sites in the city, where we had coffee outdoors. Next up was the nearby Nobel Museum to learn more about the most prestigious prize in the world. 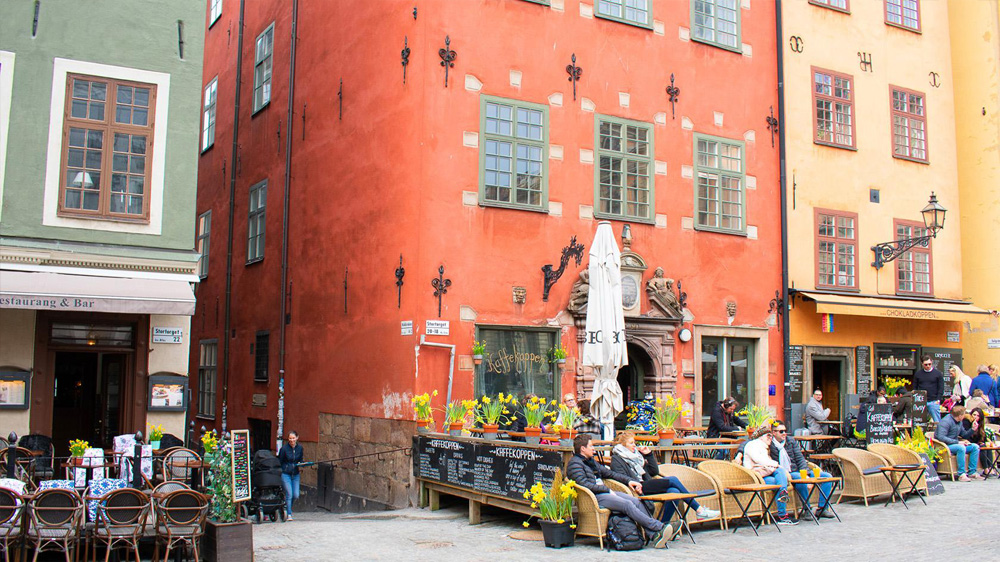 A Sauna and Soak before Shopping

We spent the rest of our time in Stockholm exploring the narrow cobbled streets of Gamla Stan before making our way back to the ship for the return journey to Helsinki. It seemed like a great idea to try out the tropical vibes in the Sunflower Oasis on deck 12 before dinner, and when we got there we knew we had been right. A quarter of an hour in the sauna, followed by a soak in the bubbling jacuzzi was the perfect way to relax and soothe the body after a day spent walking city streets. Had it been a little warmer we might have followed the steam and soak with a spell on the sundeck, but this time around we gave it a miss. 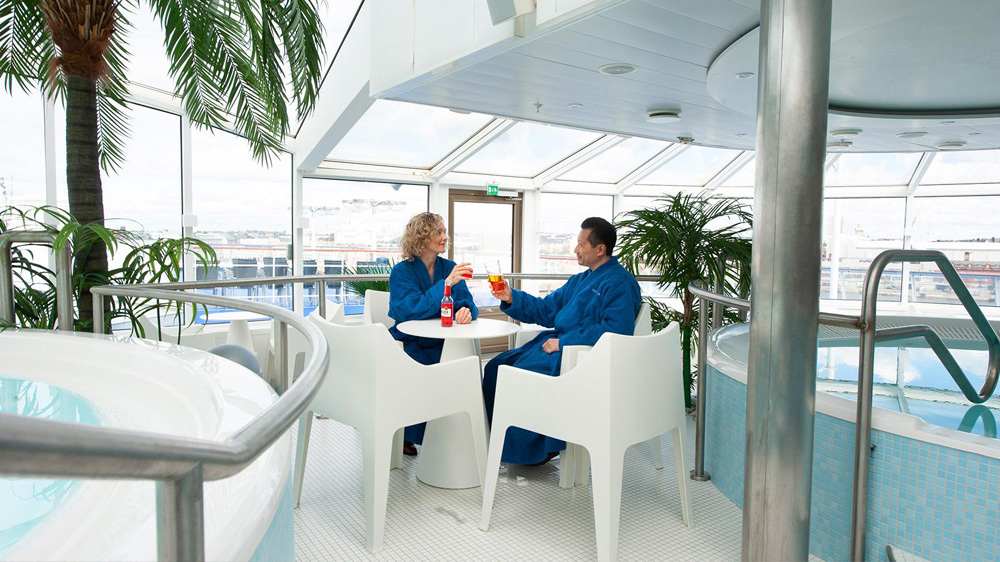 On our way down to dinner we stopped off in the ship’s Tax Free Superstore, a huge shopping area packed with cosmetics, spirits, wines, beer, tobacco products, candies, and food delicacies, with a range worthy of a decent airport. I like a decent whiskey, and the selection of top range single malt scotch was huge, the range of Japanese whisky surprising! I was happy enough to browse the shelves while my girlfriend checked out the cosmetics. 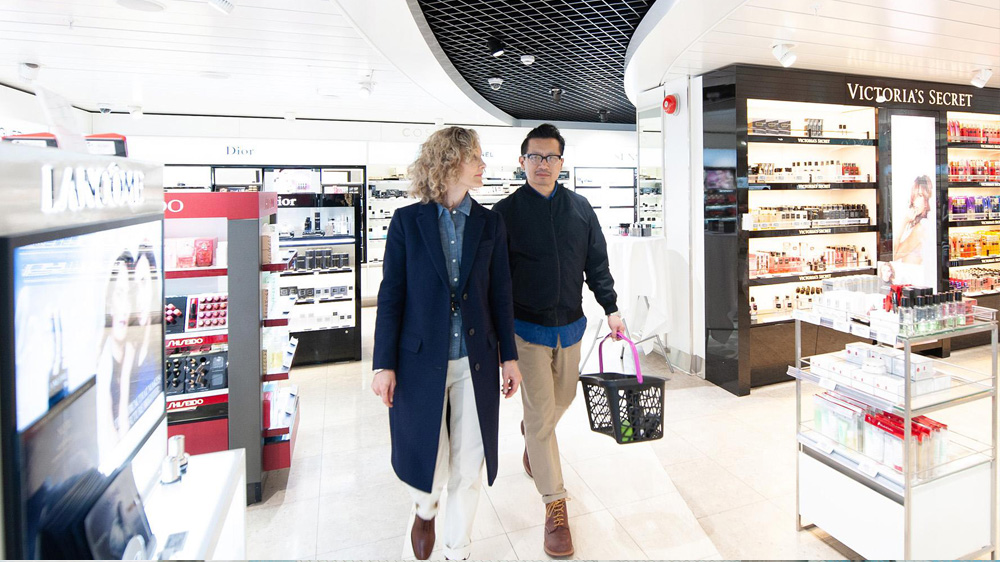 Spoiled for Choice at the Grande Buffet

Both of us happy with our purchases, we went to the Grande Buffet for dinner and we weren’t disappointed – the range of starters, main courses, and desserts was simply mouth-watering. Included in the incredible selection were fresh delicacies from the archipelago, alongside Asian fare, and everything in between, with wines, beer, and other drinks all included in the price.

A leisurely hour passed, dining slowly and chatting, before we made our way back down the promenade to see what was happening. Sure enough, as we settled at a table outside the Promenade Bar with a glass of bubbly each, an acrobatic demonstration was beginning on the stage that doubled as the roof of the Old Port Bar at the stern. A crowd gathered beneath, the acrobats’ elevated position ensuring everyone got a great view, and kids began to sit down and gaze upward in awe. I’d guess the kid in all of us looking on was no less amazed, certainly I was. Poise, strength, balance, trust, … did I mention strength? Every routine was roundly applauded and cheered. 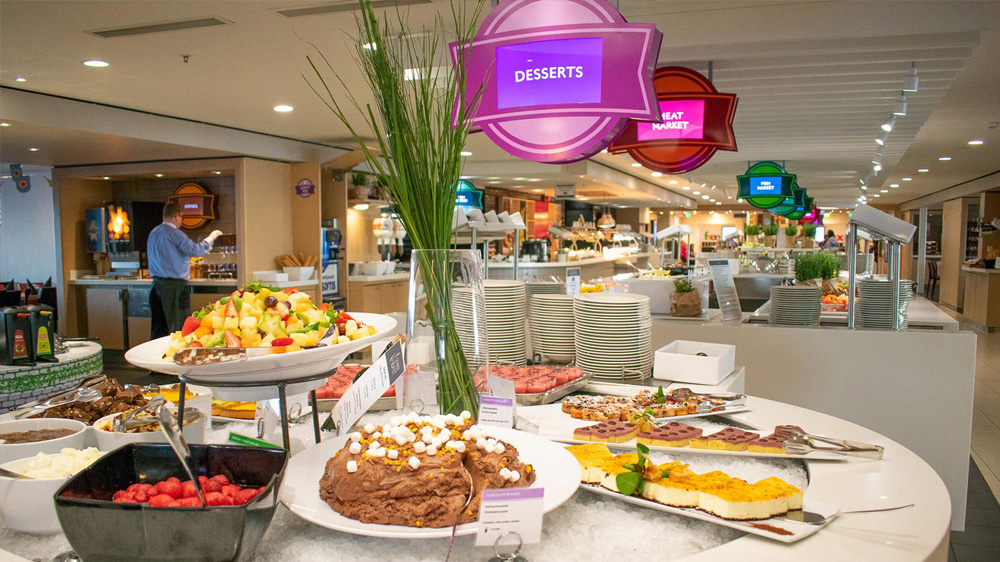 When the show ended we made our way to the New York Lounge where we enjoyed the seascapes and relaxed for a while, with some good tunes playing in the background. Come midnight the chilled lounge would transform into a buzzing nightclub, where top Djs would spin until the wee hours, but we had other plans, and they included catching the Midnight Night Show in the Atlantis Palace.

It had been recommended by a friend who made the trip earlier in the year, who knew we both liked a bit of spectacle! Sure enough, the show was a full-stage extravaganza of stunning dancers in glitzy outfits sparkling their way through some fine choreography as the music played. We stayed until the end, but passed up on the opportunity to practice our dance steps with the professionals, unlike many of the audience. Instead, we retired to bed, and awoke rested in Helsinki. 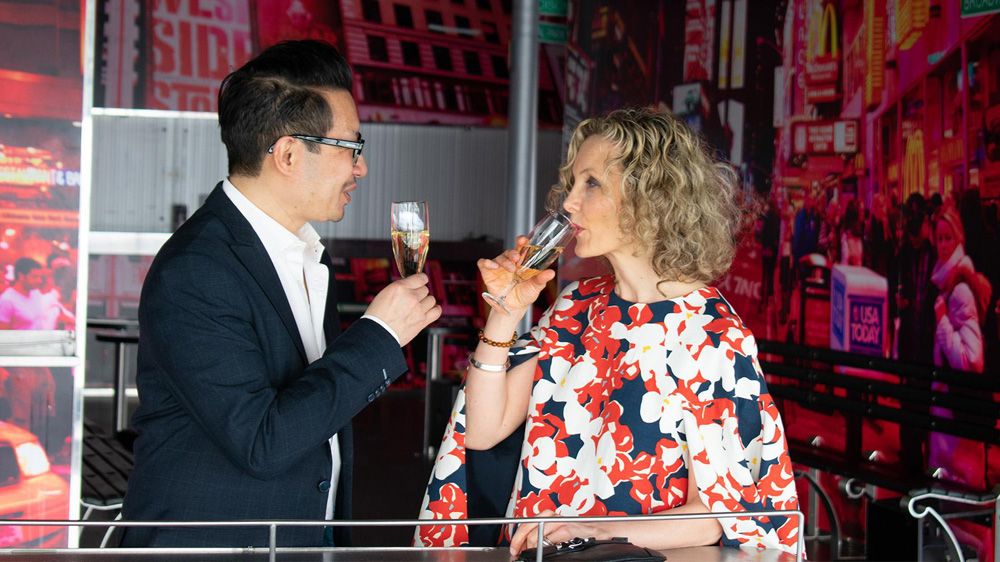 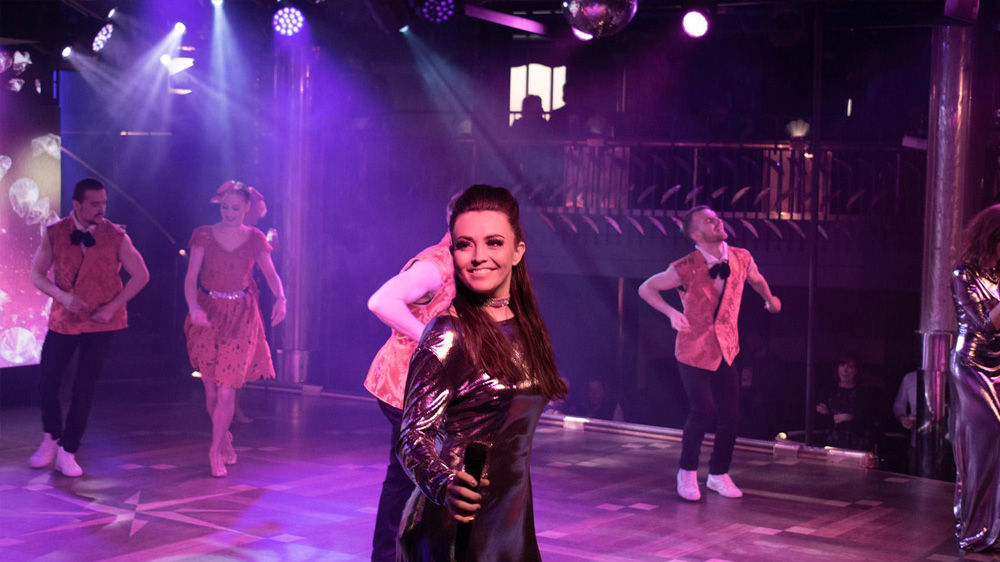 Whether you live in Finland or are just visiting for a time, the Silja Line from Helsinki to Stockholm is a great option for a two-day break. Time spent onboard the ship flies by thanks to so many choices of entertainment, and food lovers won’t be disappointed by the quality and choice provided. As the boat stops briefly in Åland, bargain hunters are able to avail of tax-free shopping, and there’s plenty of that too. 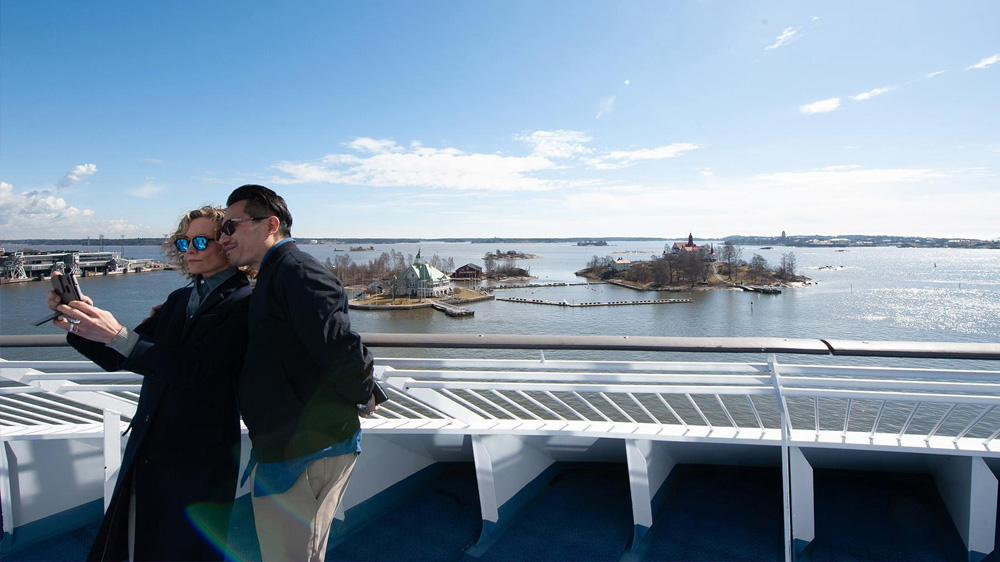 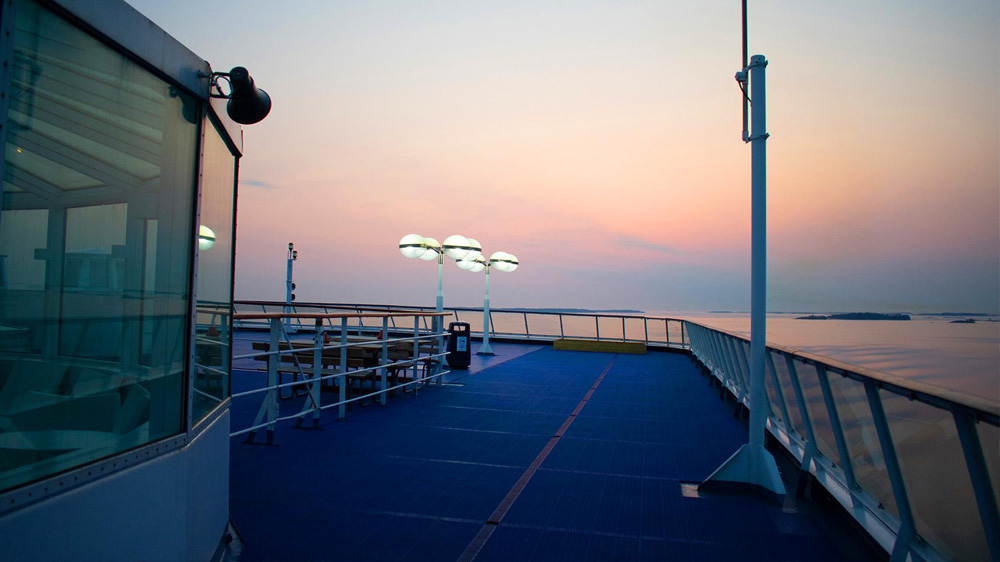 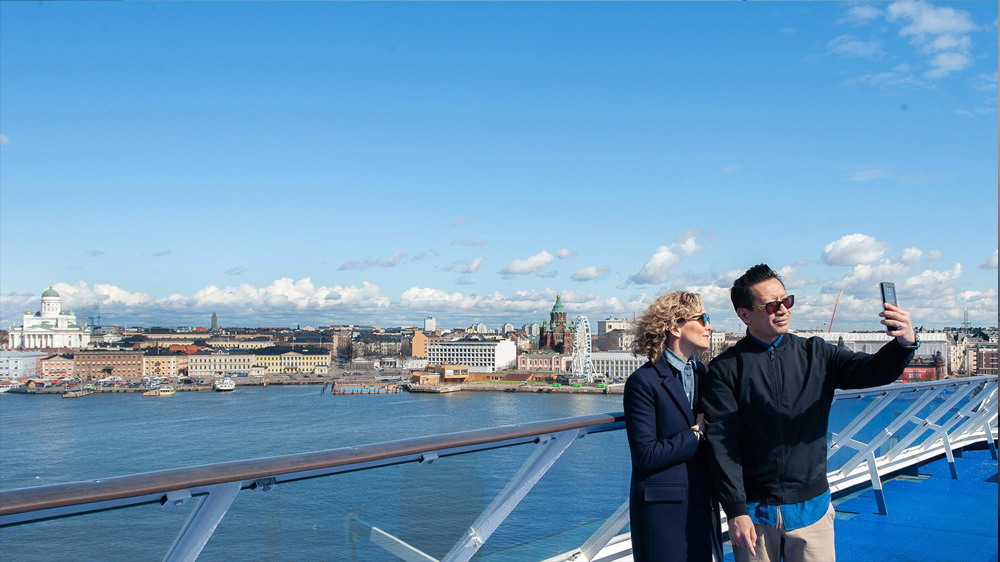 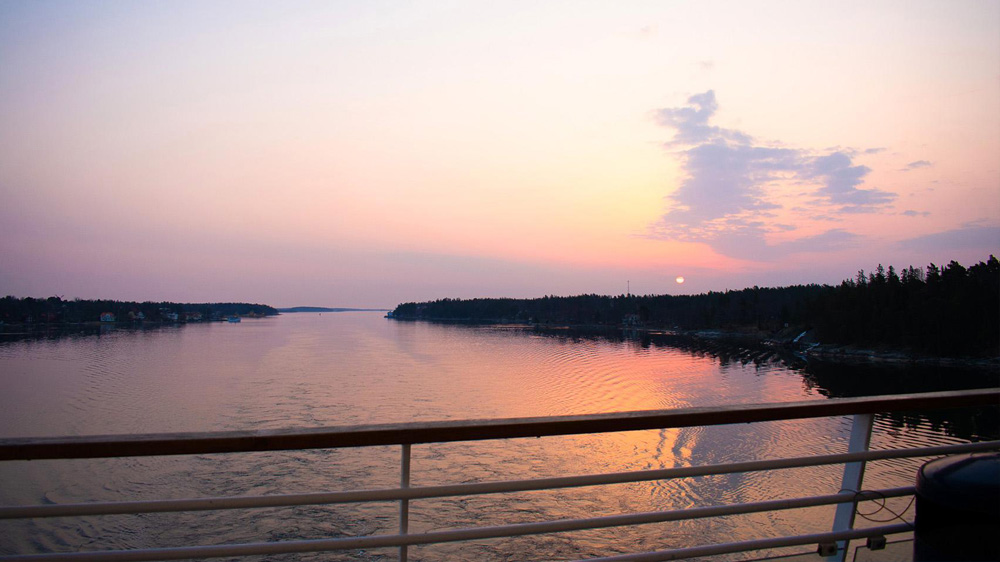