Location and ease of access are everything! That is why I chose to stay at the Radisson Blu Plaza in downtown Helsinki, literally a stone-throw away from the central railway station, with direct access by train to the airport. I wanted to be crawling distance from the city life scene and immerse in the local culture, so what better way than this historical building it’s foundation stone laid in 1917, one day before the day when Finland gained its independence. 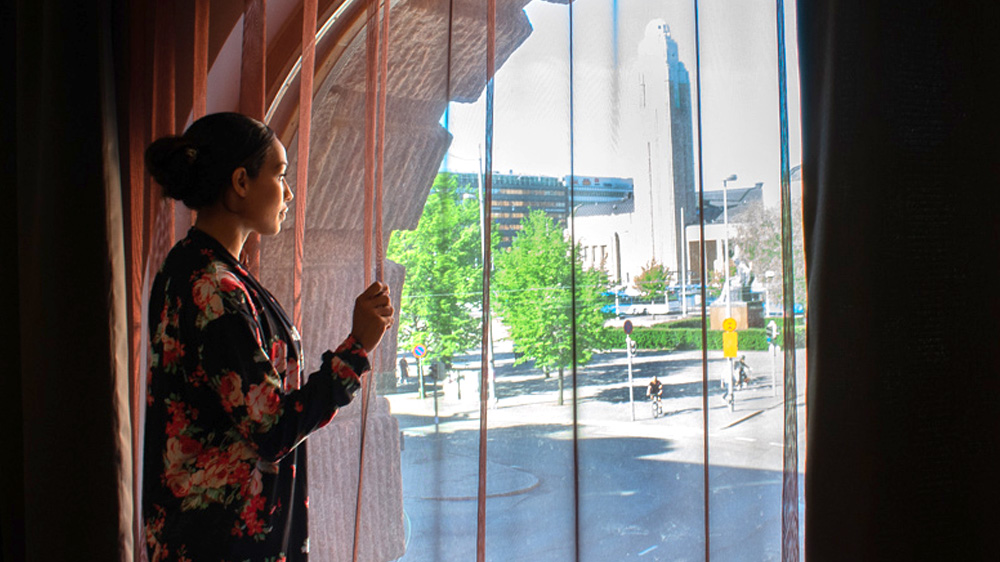 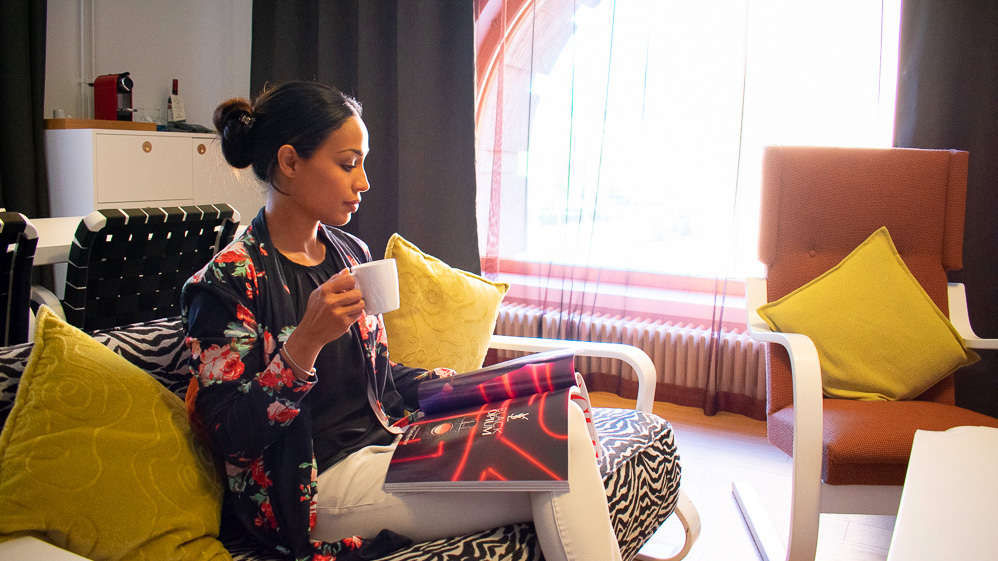 A hectic work trip finally behind me, I had earned these extra days off and extended my trip for a weekend in the classic suite named after iconic Finnish designer Alvar Aalto, with castle-like views overlooking the Rautatientori (railway square). With a plush Magic Bed® and Blu Dreams sleeping experience, I was sure to catch up on the good sleep I had missed due to my crazy work schedule in no time! The 302 rooms and suites can host up to 700 guests, and come with upscale amenities like MediaHUB control panels and high-speed wireless internet, so the choices were many. However, the Aalto Suite was love at first sight for me, being a fan of Finnish design. I was also pleasantly surprised to learn that ceiling version of the popular Eero Aarnio Double-bubble lamp was specifically commissioned for the Radisson Blu Plaza.

Whether I wanted to throw a unforgettable cocktail party in the luxurious and decorative bar, or have refreshing drinks and light snacks available 24h in the Lobby Bar, this was clearly the place to be. To keep it all in balance though, I spent a good hour on my fitness routine with the cardio and weight-training equipment at the Plaza Sports. The highlight of course, was the reward after – free access to the sauna to wind down for the evening. The Finns sure know a thing or two about relaxation! 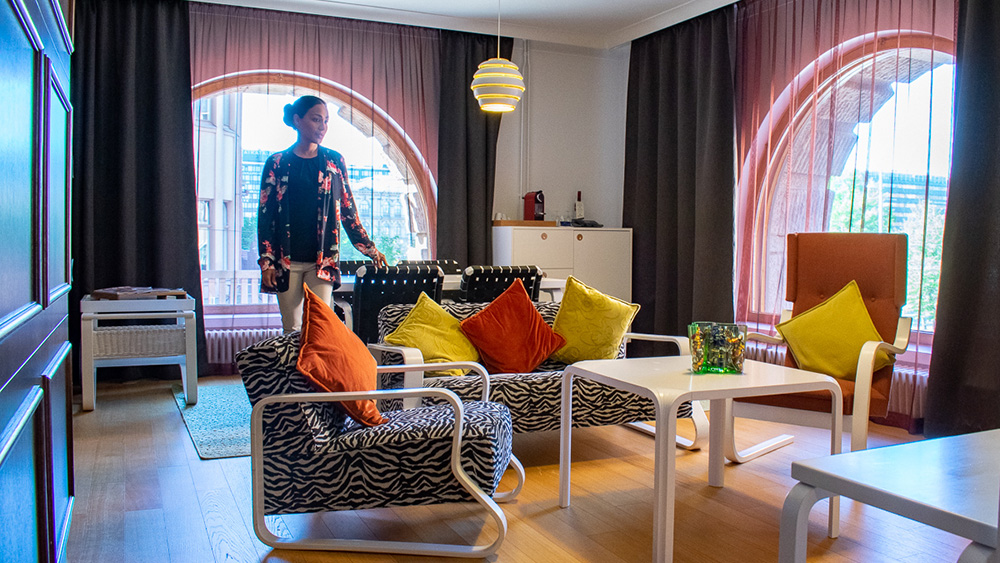 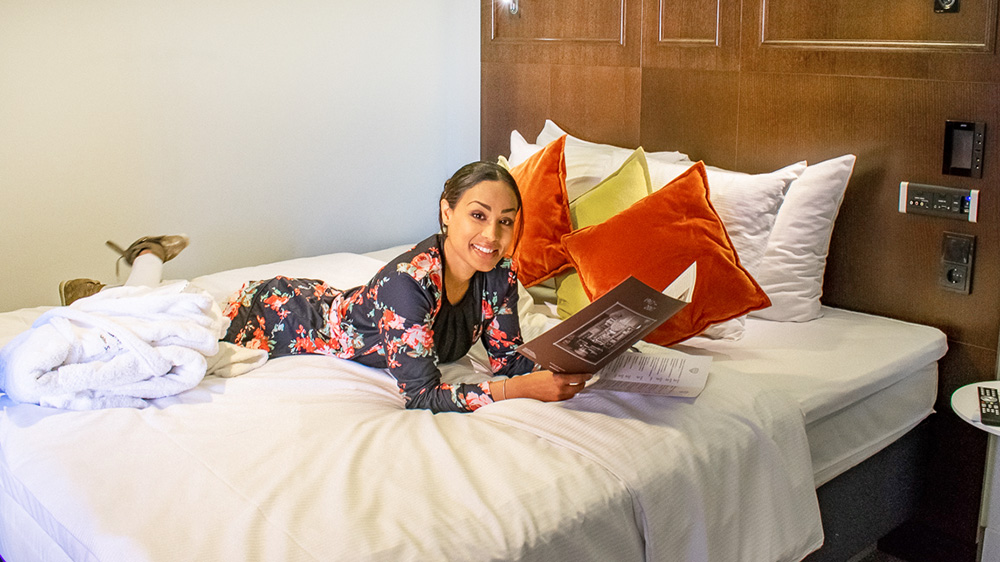 Ironic I should stay in this hotel having initially come to Helsinki for trade, because the facilities of the Radisson Blu Plaza Hotel were the former headquarters of SOK (Finland’s largest cooperative enterprises), protected by the National Board of Antiquities, and playing a significant role in the history of Finnish trading. The main entrance of the building opened into a glorious large hall, now a restaurant and bar.

The beautiful Juho Rissanen stained glass windows and the ornamental engraved oak panels throughout the building, tell tales of fisheries, shipping, trade and agriculture. Back in the day, enthusiastic guests were led to a showroom where cooperative traders sold their goods. There was everything from agricultural products to clothes and flowers. Even Harley-Davidson motorcycles, the parts of which have been imported by SOK since the 1920s. Wheels were assembled at SOK’s workshop and the ride was also the means of transport for SOK’s traveling salesmen. Lucky them! Perhaps I picked the wrong company to represent (my ride’s just a Toyota).

Most major decisions occurred in the Visco-accredited Boardroom as the building served as SOK headquarters for 70 years till the Plaza Hotel began operations in 1999, the same year the euro was introduced as a currency. Finns learned euro prices from the prices of deals and this became the flagship of the Radisson SAS high quality hotel chain – a five-star experience with a five-star location. 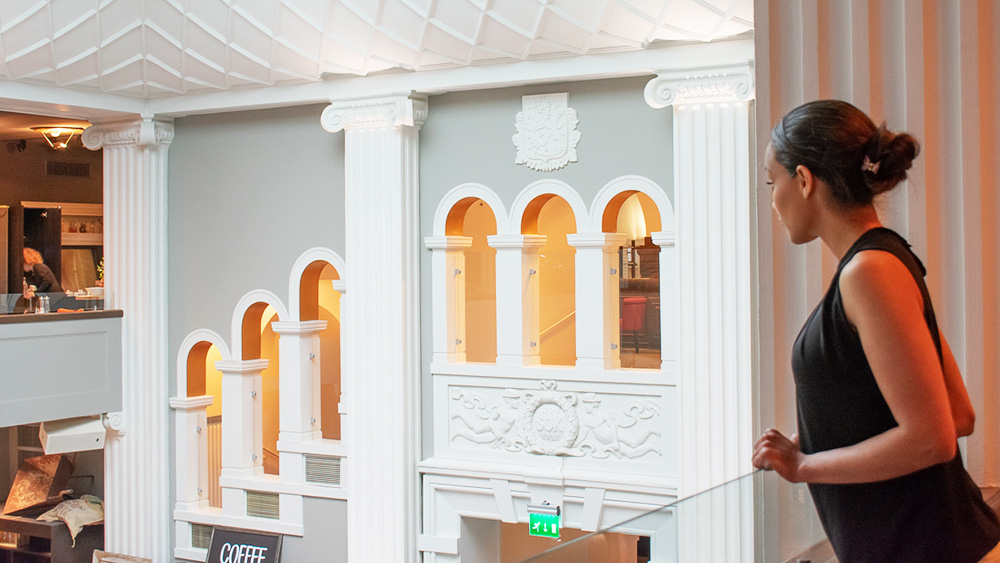 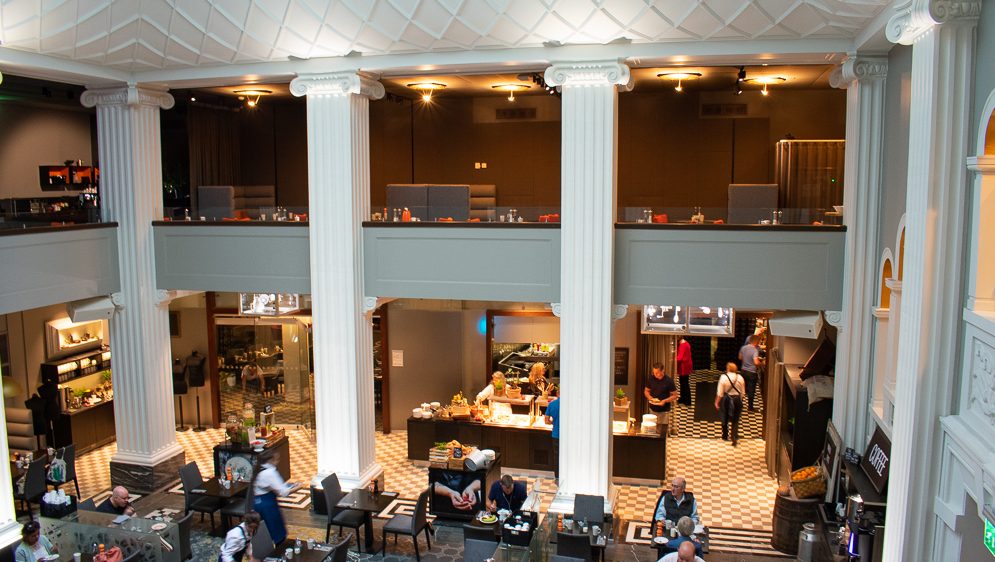 It was time to make some history of my own as I found myself in the company of hotel guests comprising of jet setters, culture seekers and business leaders like myself. I headed out for a relaxing walk to the Esplanade Park minutes away, taking note of the Grand Casino Helsinki located just outside the hotel for later. My plan was to stroll around the neighborhood through the market square (Kauppatori) by the harbour, and perhaps pick up some Marimekko fabric on the way back for my sister who is a fan. All the sites and shops worth visiting are in the area, particularly the Finnish designer ones like Artek and the fun shoes by Minna Parikka on the shopping street Aleksanterinkatu. The Ateneum Museum is just across the main street. 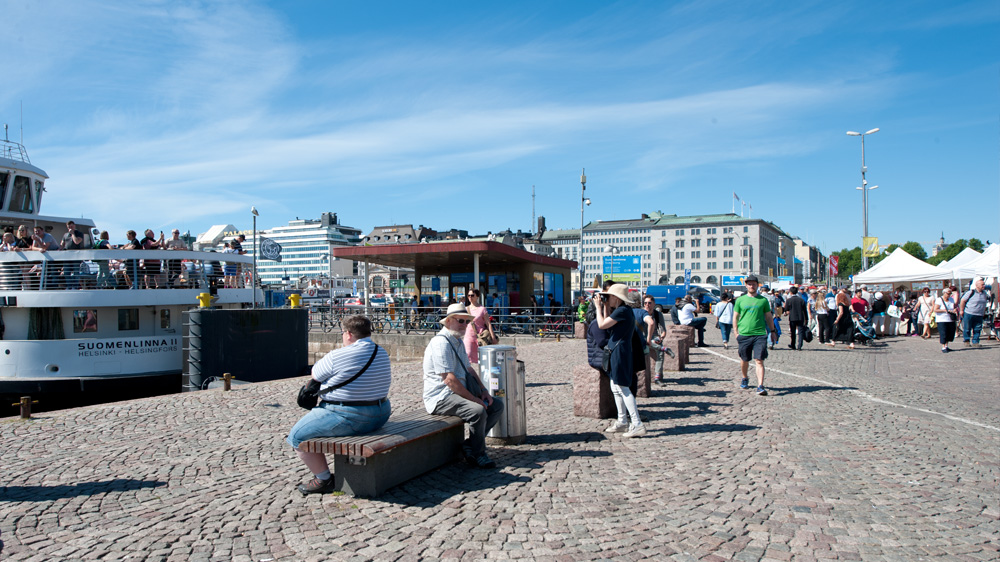 While on my city promenade, I coincidentally bumped into Anita, a friend from my last visit to Finland. We agreed to meet at the Radisson Blu Plaza terrace, which I rather accidentally spotted earlier hidden away with it’s New York style vibe and grass-carpeted floors. I wanted to try it out as I was getting hungry and Anita and I had a lot of fun there. Both of us on a quest to get fit for the summer we went with a light dish of Salmon with Creamy Kohlrabi and Beurre Blanc Sauce and the ultimate touch of a crisp white wine. As a city girl, I savour the modern creative twists of the Nordic cuisine in a sleek, sophisticated space. The weather was just perfect and when the sun went behind the clouds, we were cozy in our throw blankets, catching up on the latest gossip for hours. 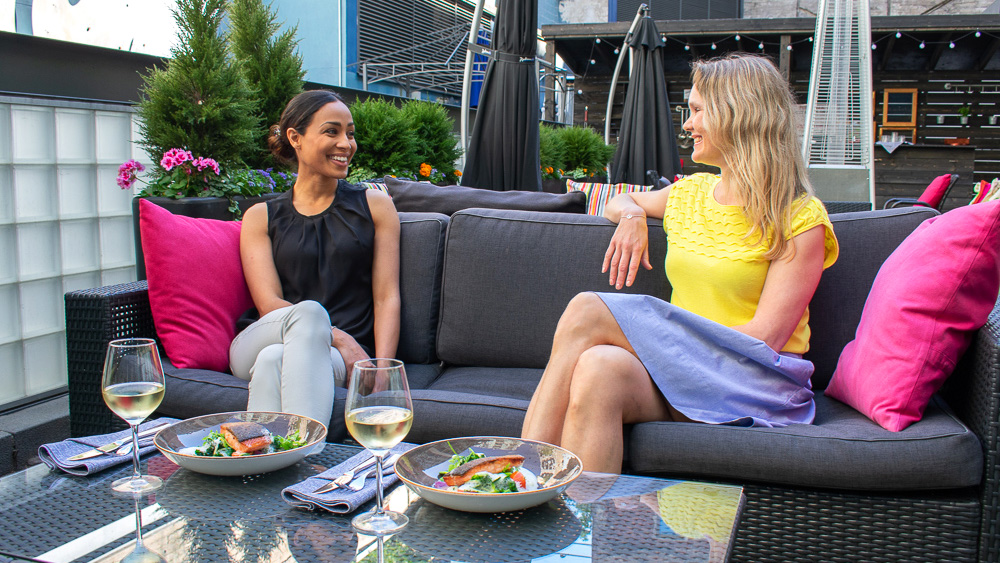 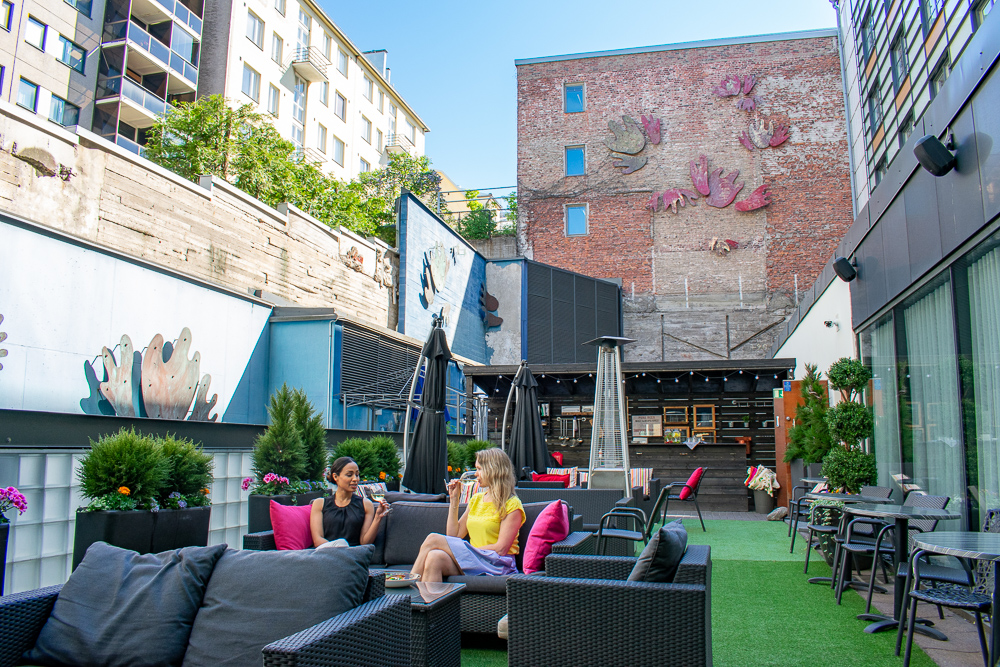 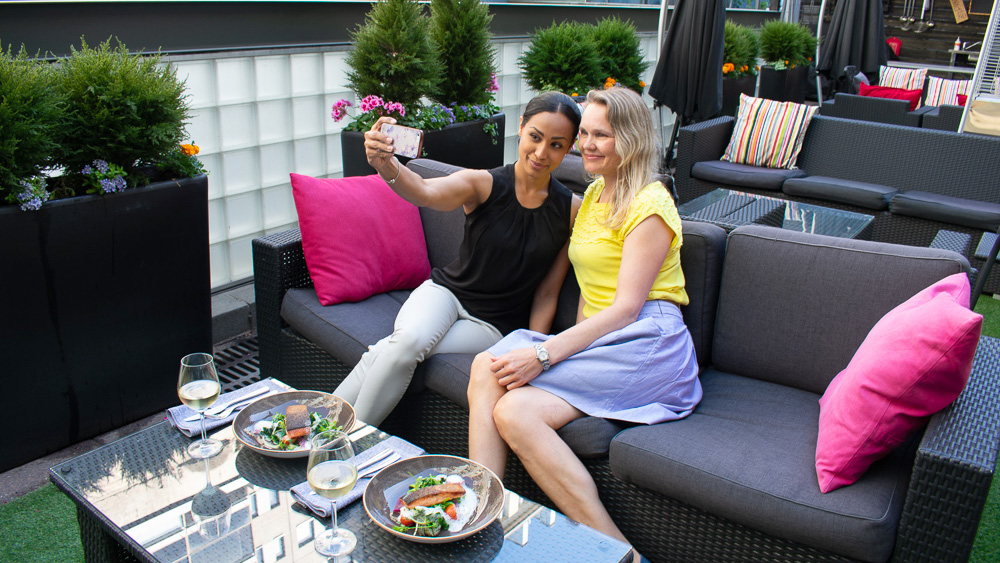 The Bar and Lounge

Discovering that our paths had taken similar twists and turns and there was much to be celebrated, we continued the evening in the bar on the other side of the hotel, which had the atmosphere of a palace with high ceilings and intricate sculptured decor. I half expected Beauty or the Beast to appear on the grand inner balcony above us or the staircase in front. As our lovely waitress popped open the bottle of champagne and our glasses met in a sound that Finns call ‘Kippis!’ (Cheers!), I had one of those moments where I thought, “This really is the life!” Someday I can tell the grandchildren I will have about the days when I was young and the grandeur of a life I enjoyed in posh places like this Radisson Blu Plaza Hotel in Helsinki. 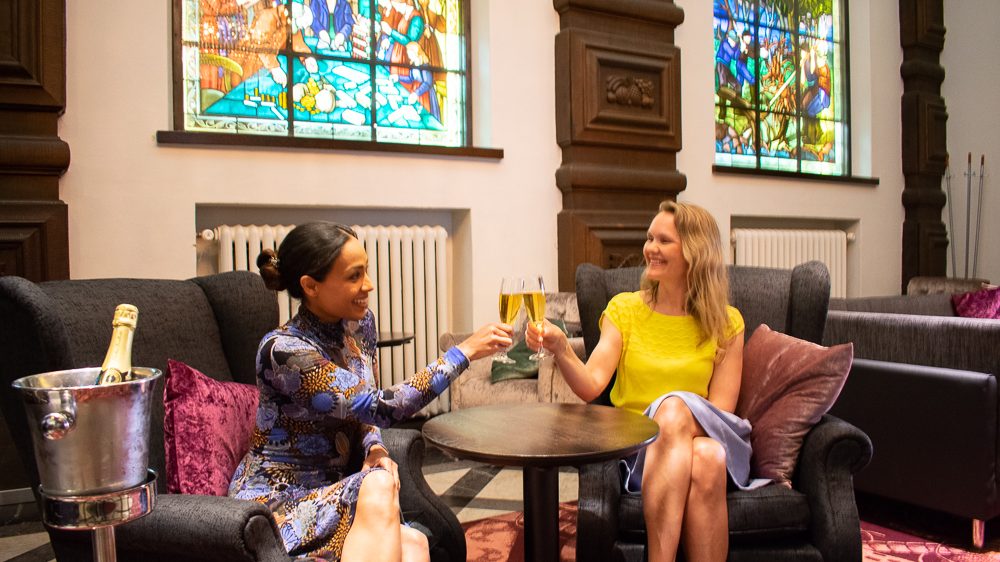 This hotel has been visited by many prestigious guests, including the EU presidency delegates, EM athletes, Lady Gaga, ABBA, Paris Hilton, and most importantly, the best ice hockey stars in the world! The Presidential couple Mauno and Tellervo Koivisto and Tarja Halonen and Pentti Arajärvi held their award ceremonies here at the restaurant converted from an auditorium. The Juho Hall’s historic interiors meant a lot to this theater man, with the National Theater almost next door.

What was absolutely adorable and unique which I have never seen before, was the mini farmer’s market, a little cove off of the main restaurant with hot fresh bread, delicious salad assortments and healthy smoothies. For a moment, I did not feel like I was in a big city hotel at all, but rather that I had woken up for breakfast just in time to choose some freshly picked ingredients in a cute little country-side hub.

I continued on my celebration streak with bubbles for my breakfast which was now turning into a brunch with the longer sleep-in in an unusually comfortable bed I did not want to wake up from. There was more food that I could try out, so I ate to my heart’s content and planned to chill for the rest of the day. 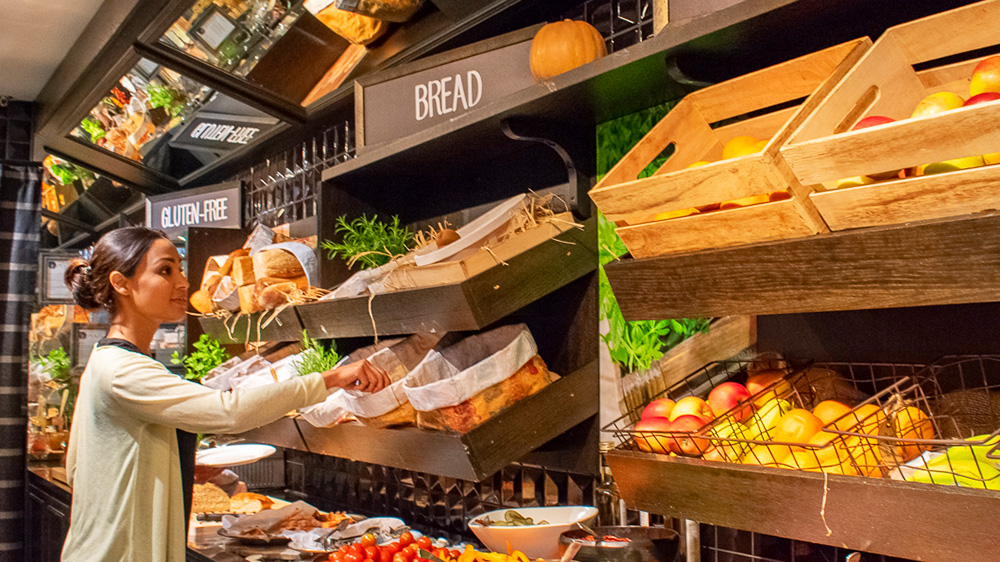 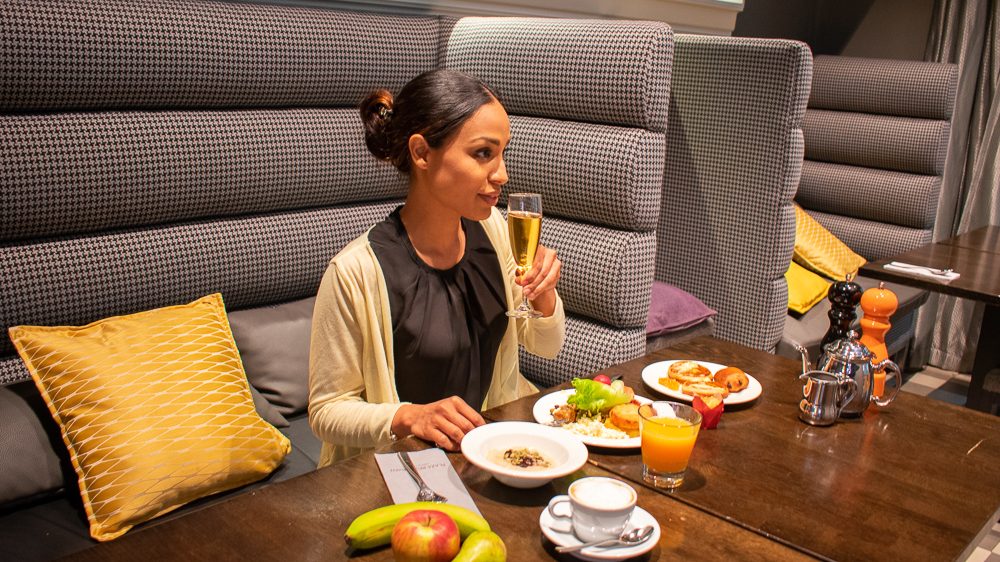 Coffee At The Business Lounge

From the Business Class up, they offer free admission to the unique Plaza Lounge where you can work, hold meetings, relax and enjoy special afternoon services. When my coffee and a beautiful assortment of chocolates and fruits arrived in front of me, suddenly I did not mind at all that I was starting my vacation day replying to a few work emails. The architecture and design and the open view down into the breakfast hall, once again had my mind wandering to the stories that must have been made here over the last 100 years. Did lovers rendezvous? Were crucial business deals made? Was this where politicians and influences whispered their great ideas into open minds? There was a lot to think about as I looked around, and fortunately, I had all the time in the world with free access to this relaxing business lounge since I had booked a business accommodation.

The only downside of traveling, is leaving. I wished I could continue this long weekend for longer, there was so much to see and do, and most of all, I was enjoying sleeping with no alarm clock. Going home from Radisson Blu Plaza was like taking a part of the intriguing Finnish story and culture with me. The hotel was ever so convenient to reach my meetings from, and I had time to see all the attractions because of its central location. Radisson BLU Plaza Hotel is the prime choice for visitors to Helsinki who wish to stay in the center in a story-filled building of character, rather than “just a hotel”. 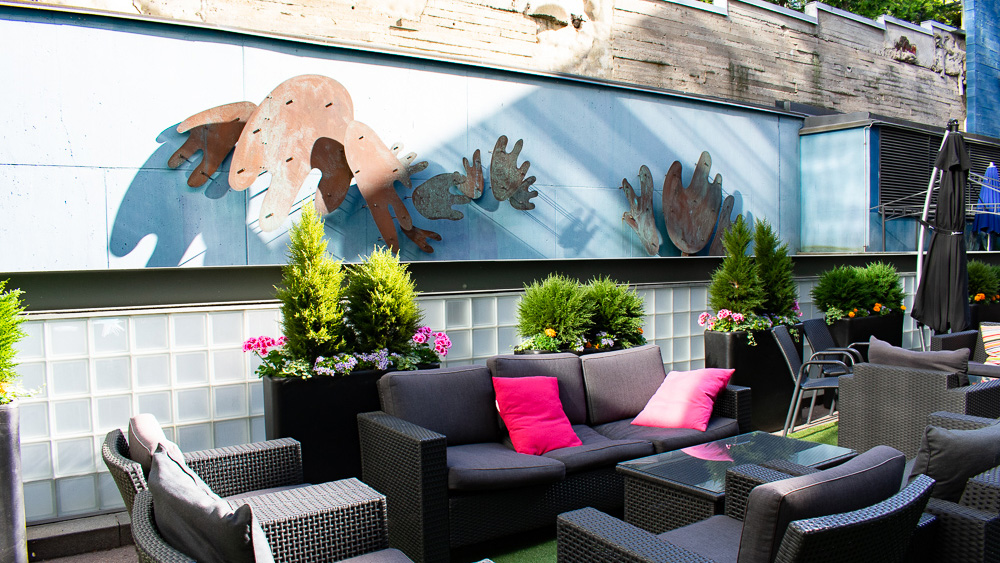 accommodation featuredhotels featured
Cookies are used for measurement, optimization and to make your website browsing experience as smooth as possible. Continue to accept or Read more