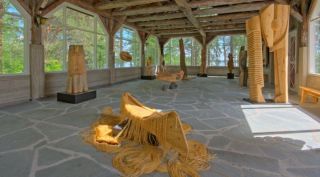 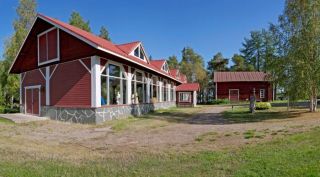 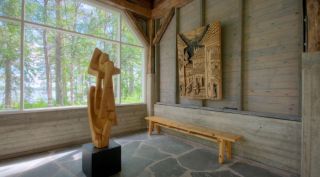 The old courtyard of the prestigious Puusteli, located in Särkikangas, Kemijärvi, is a place that all cultural travellers interested in art and lakeside milieu should visit. Puustelli was originally built on the shores of Lake Pöyliö in 1865 as the official house of Johan Gebhard. Johan Gebhard’s son, Hannes Gebhard, later became the founder of Finnish Cooperative Movement. Puustelli is composed of the official house refurbished as banquet rooms, a warehouse and exhibition hall for wooden sculptures.

The prestigious official house of Puustelli has been beautifully restored and decorated with Gustavian furniture, and it can be rented for occasions such as meetings and parties held by town residents, companies and associations. The banquet rooms are registered as a gathering place for up to 100 people. The front of the house and its surroundings contain several sculptures produced during the Woodsculpting Weeks.