Messilä Ski Resort is the largest in Southern Finland, operated from within the grounds of the historic Messilä Manor, located a few kilometres west of Lahti. The resort provides a range of accommodation options, from traditional hotel rooms to log cabins with their own sauna. There are 10 slopes, all are illuminated and all are serviced by snow machines. The longest slope is 800m, there is 1 black, 4 red, 2 blue and 3 green slopes, with 2 slopes for children and a play area. Snowboarders have a Snow Park and Skicross Track with rails, boxes and moguls. Cross country skiers have 70km of trails available, with 20km of those illuminated. 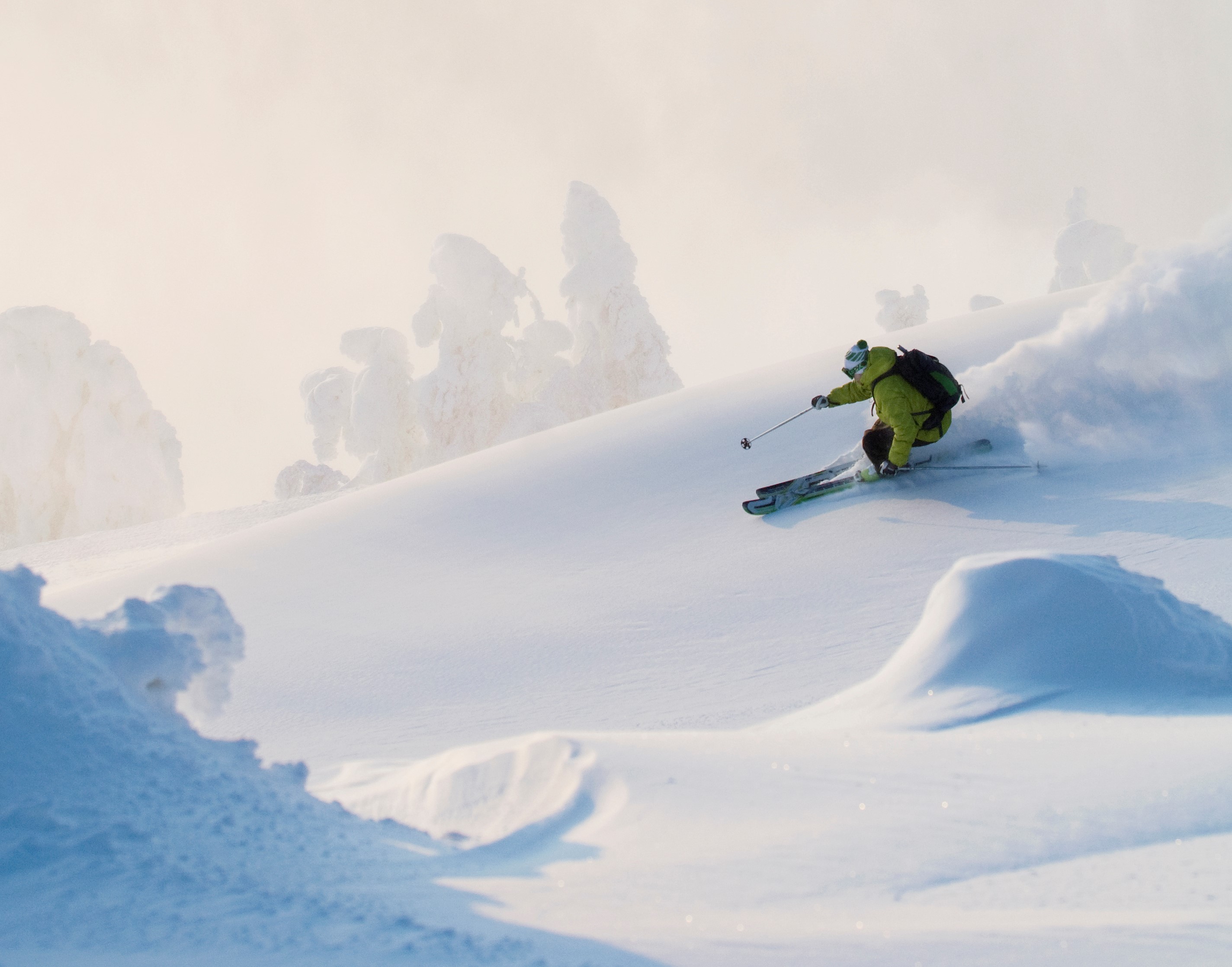 Sappee Ski Centre, located near the small town of Salmentaka some 50km east of Tampere, is one of the best in Southern Finland. There are 11 slopes, all of them illuminated and serviced by snow machines, with 3 slopes available for children. The longest slope is 850m, there are 5 red, 2 blue, and 4 green slopes. The Snow Park is regarded by snowboarders as one of the finest in the country, with skicross tracks, rails and boxes, and there are 14km of cross country trails available. Sappee has a large event centre, Huippu, which hosts concerts, there are a number of restaurants, and it recently opened a new apartment hotel called Sappee Chalet right next to the slopes.

Talma Ski Centre, located just 6km east of Kerava (with a free shuttle bus operating between the railway station and Talma daily) and 30 minutes from Helsinki centre, has gained something of an international reputation in the snowboarding world. There are just 8 slopes here, all illuminated, the longest of which is 450m, with 3 slopes for children. The Snow Park is one of the best in the world, with rails, boxes, moguls, quarter and half pipes.

The Vihti Ski Resort, located in Ojakkala near the town of Nurmijärvi, is the largest in the capital region, with 13 slopes, all of which are illuminated and the longest being 650m. There are 3 children’s slopes and a play area, and snowboarders will find a skicross track and rails and boxes. The slopes range from a Stenmark competition slope to easy beginner slopes, with the emphasis in Vihti being on family fun – there is a ski and sled carousel, and at weekends Winterland provides horse-sleigh rides, dogsled rides, and Winter Nalle is on hand to entertain the smallest ones.

Located 10km from the town of Hankasalmi, the Häkärinteet Ski Resort has a fine reputation as a child-friendly holiday resort. There are 13 slopes of which 7 are lit and the longest is 800m. There are 4 black runs, 2 red, 5 blue and 2 green, with 2 slopes for children and the “Children’s Land” play area. The Snow Park has a skicross track, rails, boxes and moguls. There are 48km of cross country trails, of which 4km are illuminated.

Himos is located near the town of Jämsä, south of Jyväskylä, and is one of the largest of the ski resorts in Central Finland with a total of 21 slopes, the longest being 950m. There are 8 black runs, 5 red, 4 blue, and 4 green, all of them illuminated. There are 4 slopes for children and a play area, and the Snow Park features rails, boxes and moguls. Children under 7 can ski free of charge, and there are 4 free lifts for beginners of every age. Cross country skiers have 20km of trails to explore, with 6km illuminated. 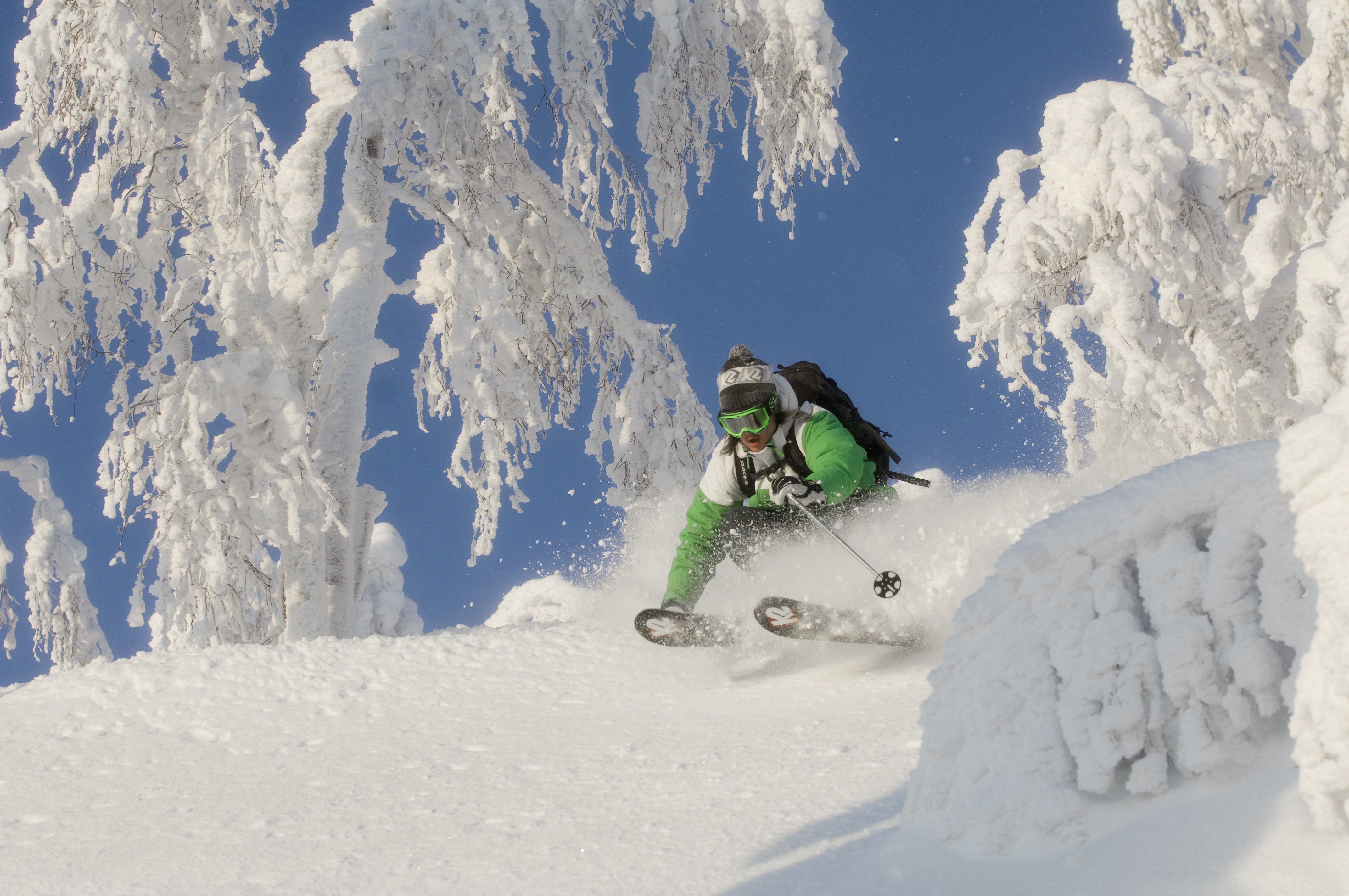 Situated due north of Joensuu by the northern tip of the beautiful Koli National Park, there is something for every type of skier at Koli. Between Ukko-koli and Loma-koli there are 12 slopes, 8 of which are illuminated and the longest being 1,500m. There are 4 black runs, 4 red and 4 blue, with 2 slopes and a play area for children. Koli also provides 60km of cross country ski trails, with 22km of these being illuminated.

The Laajis Laajavuori Ski Centre is conveniently located close to Jyväskylä, and provides 12 slopes, with 8 of them illuminated and the longest being 914m. The slopes comprise 2 black runs, 3 red, 2 blue and 5 green. A brand new section called the Laajis World Cup Park has been opened for children, with 3 slopes for and a play area, plus 2 carousel lifts, a magic carpet lift and much more – and it’s all free! Snowboarders will find rails, boxes and moguls, and the centre has also updated its 62km of cross country trails with new signposts and lean-to shelters, and 15km are now lit.

Tahko Ski Centre, located at Tahkovuori, Nilsiä north of Kuopio, is the largest ski resort in Central Finland. There are 23 slopes, 5 black runs, 7 red, 9 blue and 8 green, with 11 of these illuminated and the longest being 1,200m. There is a children’s slope and play area, and the Snow Park features rails, boxes and a super pipe. Cross country skiers have almost 80km of trails available, with 16km illuminated. Tahko is one of the most popular ski resorts in Finland thanks to the constantly evolving and improving services; a range of accommodation choices is available, there are plenty of events and entertainments provided to spice up the nights, and there is the option to be pampered at the luxurious Tahko Spa. Diners have a wide range to choose from, including a restaurant that specialises in game dishes.

Located close by Syöte National Park, 140km northeast of Oulu, Iso-Syöte is Finland’s most southerly fell. There are 15 slopes in total, with 8 of them illuminated and the longest being 1,200m. There are 3 black runs, 5 red, 4 blue and 3 green, with 2 slopes and a play area for children. The Snow Park provides snowboarders with almost 1km of street that has a skicross track, rails, boxes and moguls. There are 120km of cross country trails, with 21km illuminated and 6 cafés, 10 lean-tos and 2 wilderness huts along the trails. There are opportunities for fine off-piste skiing, with some challenging drops and descents for even the most experienced of skiers.

With 45 slopes, the Levi Ski Resort near the Lapland village of Kittilä is one of the largest in Finland. There are 3 black runs, 13 red, 18 blue and 1 green, the longest of which is 2,500km and 17 of which are illuminated. Children are well catered for, with no less than slopes and a play area: Kid´s Land has free weekly program, stick and rope lifts, two bowling halls, a brand new Spa with 17 pools and Children’s World. Snowboarders can enjoy a Snow Park with rails, boxes and a super pipe. The ski school is truly international, with lessons available in 6 different languages. There are 230km of ski trails, with 28km illuminated, 17 skitrack cafeterias and 12 lean-tos. The resort has 23,000 beds available, in hotels, apartment hotels and log cabins – 186 of which permit pets.

The twin resorts of Pyhä-Luosto provides a total of 21 slopes: at Pyhä there 2 black runs, 3 red, 5 blue and 2 green, 12 of which are illuminated and the longest being 1,800m; at Luosto there is 1 black run, 2 red and 4 blue, 3 of which are lit and the longest being 1,500m. Pyhä has a Snow Park with rails, boxes and moguls, and both have a children’s slope and play areas. There are almost 170 kilometres of cross country ski trails, with around 40km illuminated. Pyhä has underwent much modernisation, and now features a new express chairlift, FIS slope, SkiWay and Polar Lift, all of which helped it to be chosen as Finnish Ski Resort of the Year 2011. These two fell resorts are situated between Sodankylä and Kemijärvi in Lapland, and feature modern hotels, cosy log cabins and spa facilities.

Located just 25km north of Kuusamo, Ruka is renowned for its fine slopes, and one of the longest seasons in Finland. There are 30 slopes here, with 5 black runs, 11 red and 14 blue, of which 26 are illuminated and the longest is 1,300m. There are 2 slopes for children and a play area. Ruka has a skicross track and the excellent BatteryPark has excellent jumps, featuring rails, boxes, moguls and an FIS classified super pipe. Ruka has hosted FIS Freestyle Ski World Cup, and will host FIS Snbowboard World Cup on December 16th and 17th 2011. There are over 500km of cross country ski trails, with 214km of freestyle/skate tracks and almost 34km being illuminated. The resort provides over 25,000 beds, and boasts no less than 28 restaurants.

The ski resort in Salla, a small town that proclaims itself to be “in the middle of nowhere” is located east of Kemijärvi near the Russian border. The resort prides itself on being smaller scale and more intimate, but still has 15 fine slopes, 3 black runs, 4 red, 8 blue and 2 green, of which 11 are illuminated and the longest is 1,300m. There are 2 slopes and a play area for children, and a Snow Park with rails and boxes. Cross country skiers have 160km of ski trails to explore, 47km are lit, and there are 5 rest stops offering refreshments in various parts of the fells, with 10 lean-tos.

Ski Saariselkä can safely claim to be Europe’s most northerly holiday resort, located in Northern Lapland a little south of the Sámi village of Inari, an important centre for Sámi culture and heritage. Ski Saariselkä has 15 slopes, 7 of which are lit and the longest being 1,300m. There is 1 black run, 5 red, 3 blue and 6 green, with 2 slopes for children, those under 7 wearing a helmet are admitted free of charge. The Snow Park features rails, boxes and a quarter pipe, and there is also almost 1km of a tobogan run that ends in the village.

Situated almost equidistant between Kolari and Kittilä by the southern edge of the Pallas-Yllästunturi National Park, Ylläs Ski is the largest ski resort in Finland. The area consists of seven fells and two original Sámi villages, and has no less than 63 slopes to choose from, with 34 of these illuminated and the longest being 3km. There are 6 black runs, 24 red, 27 blue and 6 green. There are FIS approved Downhill, Super-G, Giant Slalom and Slalom Slopes, and the resort is a particular favourite with telemark skiers as there are several fells of untouched snow.There are an incredible 24 slopes for children, and a dedicated play area. Ylläs has four different Snow Parks: YlläsPark and Mountain Dew Junior park are located in the Sport Resort Ylläs area and on the other side of the fell Ylläs-Ski has Fun Park and Junior Park.

activities adventure featuredlapland featuredskiing featured
Cookies are used for measurement, optimization and to make your website browsing experience as smooth as possible. Continue to accept or Read more