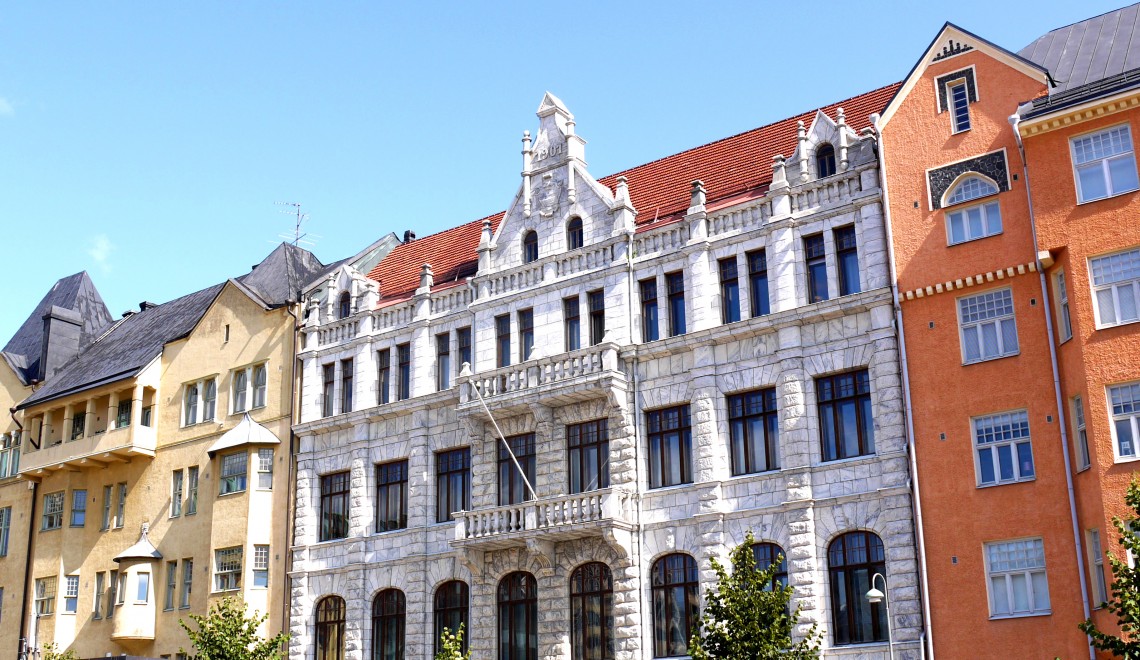 Recently while doing some back-ups I discovered that I had a huge cache of photographs that I’ve taken over the last six years, many of which are of the architecture in Helsinki. I’ll admit to being fascinated with architecture, and especially with residential buildings, which makes walking around the city an absolute pleasure. Perhaps because Helsinki is a relatively new city, it boasts an amazing array of very different building styles, and has an especially rich vein of National Romantic buildings. National Romantic was the Finnish reaction to Jugendstil or Art Nouveau, blending elements of these European styles with motifs taken from Finnish national identity and myths, especially from the epic Kalevala.

The following 20 are chosen somewhat at random, and reflect my own personal taste – which is to say that they are among my favourites. Some of them are considered important enough for me to have been able to add a little information, many are identified simply by their address. The main idea is to encourage visitors to Helsinki to perhaps leave the main tourist areas to explore the neighbourhoods where they’ll find these beauties – they’re closer than you think.

Architecture in Helsinki – 20 of the best buildings

Next to Finlandia Hall is situated the elegant Hakasalmi Villa which is a branch of Helsinki City Museum. The villa was once the private home of Aurora Karamzin (1808-1902), the benefactress and founder of the Helsinki Deaconess Institute who once served in the Russian royal court. Karamzin lived here until her death.

A view of Hakaniemi Market Square from Kruununhaka. Next to the market square is the Hakaniemi Market Hall, with the green roof. The red brick building with domed towers is Arena-house (1929 Lars Sonck), named after the comedy theater still running in the building. It was saved in the 60’s demolishing of old Helsinki only because it filled it’s space in it´s triangle-shape block so well. In the background the tower of Kallio Church looms proud.

The Military Museum was founded November 25, 1929 by Evert Lagerspetz . The opening ceremony followed October 18, 1930 at Liisankatu, in Kruununhaka. The task of the museum is to collect, preserve, research and display artifacts and other heritage related to the Defence Forces of Finland, to military history and to the history of weaponry.

Rauhankatu 1 : Architects Lars Sonck, Onni Tarjanne, 1900. Known as ‘the pearl of Kruununhaka’, it was voted most desirable residence in Helsinki.

Katajanokankatu 1. One of the most loved Jugend buildings in Helsinki. The runner-up in the public vote for the most beautiful Jugend building in Helsinki organized by Helsingin Sanomat in 2007. The architects were Herman Gesellius, Armas Lindgren & Eliel Saarinen. The towers of the building are inspired by the Olavinlinna Castle. Completed in 1903.

Luotsikatu 10. Norma was built in 1904 and designed by architects von Essen, Kallio & Ikäläinen.

Lönnrotinkatu 5 –  The building was completed in 1911 for the Suomi Group to serve as its headquarters. Opposite the Old Church, today it houses the Galerie Forsblom – one of the leading private galleries in Northern Europe.

The Natural History Museum building has been part of Helsinki since 1913, maintaining its external appearance in its original form. Designed by Lev Siško, counsellor of education from St. Petersburg . Siško’s assistant and supervisor of constructions was another architect from the same city, Mihal Tšaiko. It represents the neo-baroque style, which was uncommon for turn-of-the-century Russian constructions and is rare in Helsinki.

The National Museum of Finland, designed by the Finnish architects Herman Gesellius, Armas Lindgren and Eliel Saarinen. They won the architectural competition for the project in 1902, and the building work was conducted mainly between 1905 and 1910. The museum was opened to the public in 1916. The vaulted central hall leads to the various departments of the museum. Featured on the vaults are frescoes by Akseli Gallen-Kallela from 1928 on themes from the Kalevala epic.

Kivi-talo Säätiö – Stiftelsen Villa Kivi is a meeting place for writers’ associations. It also provides facilities for private and company events. designed by architect Selim Lindqvist in 1890 together with the builder Elia Heikel. Lived in the house for a while, inter alia, K. J. Ståhlberg, who later became the first President of the Republic of Finland.

ArchitectureArt NouveauhelsinkiJugendstilMilitary Museummonuments featuredNational Museum of FinlandNational RomanticNatural History Museum
Cookies are used for measurement, optimization and to make your website browsing experience as smooth as possible. Continue to accept or Read more