The seaside town of Ekenäs (or Tammisaari in Finnish) is an ideal day-trip destination for families with children, as well as for those with an interest in history and nature. With regular connections by rail and by bus, this picturesque coastal town is easy to get to, and once there its compact size makes it easy to explore.

Ekenäs is situated in the historic municipality of Raseborg, about midway between Helsinki and Turku, approximately an hour from either city. Named for an ancient castle, Raseborg is a wonderful mix of spectacular nature, historical sites, and cultural attractions, with the added bonus of having access to the islands of the archipelago in the Baltic Sea. 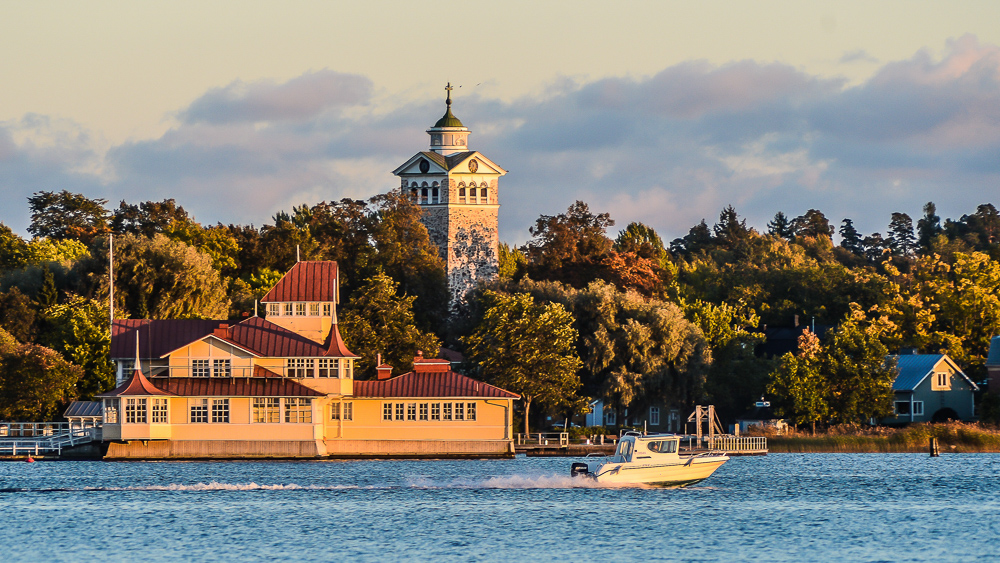 Although Ekenäs isn’t a large town, it has more than enough attractions and sites to fill a family’s day. Settled as a fishing village in the 16th century, it features a charming Old Town of quaint wooden buildings that date from the late 18th and the 19th centuries. Many of the streets here were named for the skilled trades practiced here in olden days: Hatter’s Street, Linen Weaver’s Street, Cloth Weaver’s Street, Smith’s Street, and Tanner’s Street. There are plenty of fascinating details in the Old Town to please any shutterbug, from the cast-iron lamp posts to the ’gossip mirrors’ in the windows, the intricate window frames and the elegant garden gates, not to mention the little signs with names of fish that identify each block.

At the edge of the Old Town you’ll find Kungsgatan, the first pedestrian street in Finland, and one of the main shopping streets today. It begins opposite Rådhustorget, the town’s market square, where every Wednesday and Saturday a bustling open market takes place.

There are short, two hour, guided sightseeing tours available for visitors every Wednesday, or bookable in advance from the tourist office, located next to the market square. 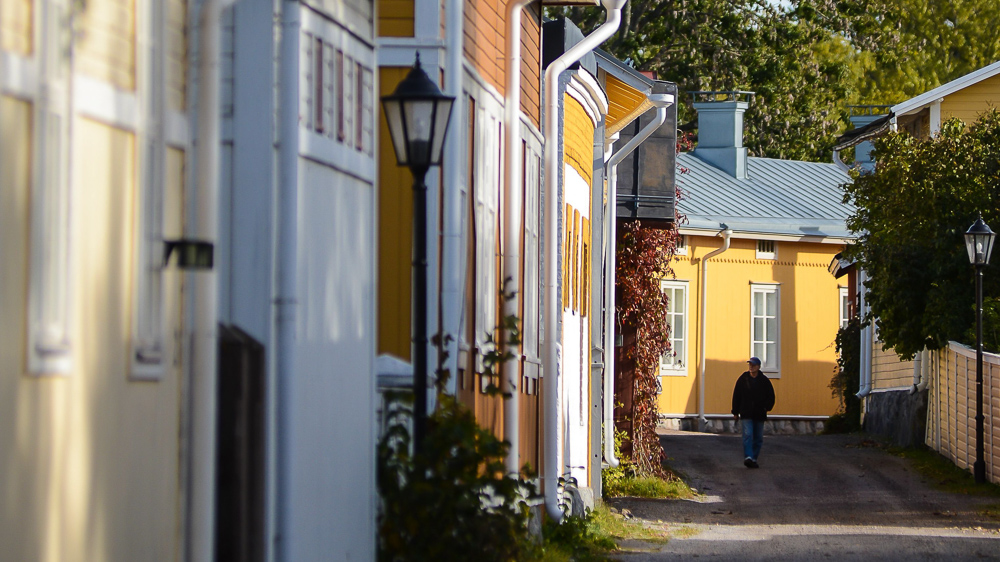 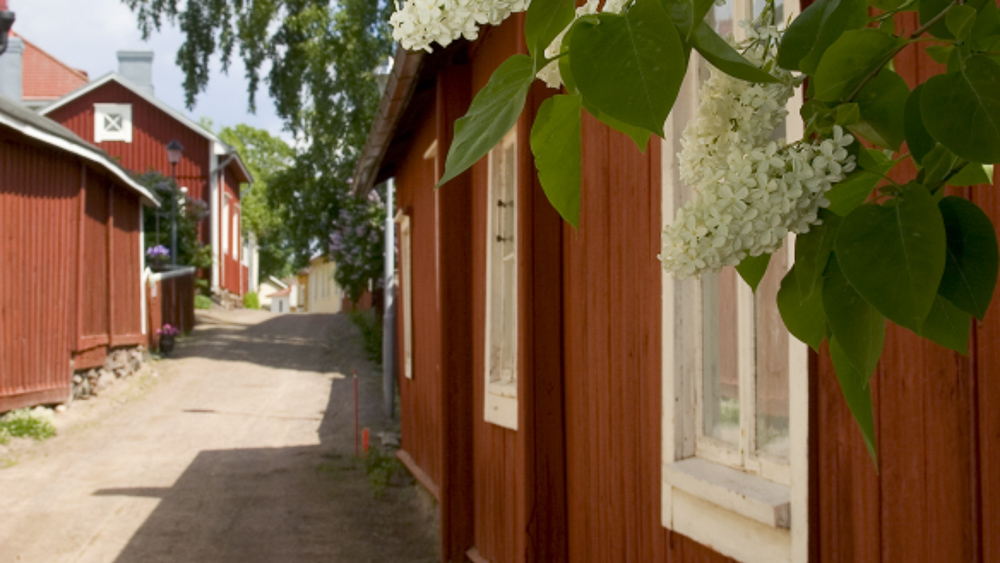 As Ekenäs is situated on a peninsula, surrounded by water, one of the most pleasant ways of exploring is to walk along the seafront taking in the views of the archipelago.

All along the coast visitors will find numerous small marinas and verdant parks. On the southern bay lies Våghusparken with memorials to two Ekenäs natives who were named Knights of the Mannerheim Cross, and nearby you’ll find Skepparträdgården, with a bell visitors can ring, set there in memory of one of Finland’s finest artists, Helene Schjerfbeck. During the summer months the terraces in Stallörsparken park and at the guest marina attract holiday makers and locals, especially in the late evening when the sun begins its slow descent to the horizon.

EKTA – A Museum of History & Art

Not far from Stallörsparken visitors will find EKTA, a museum that celebrates the rich maritime history of the region, and the life and work of Ekenäs’ most celebrated resident, the artist Helene Schjerfbeck. The permanent exhibition shows her art as well as personal items, including the iconic rocking chair that features in a number of her most famous works. The museum also hosts changing exhibitions featuring different themes.

The history of the Raseborg region from the the 18th century until the 1950s can be explored in the Merchant’s House, the House of Blomberg, and in the Forngården house museum, all of which are open during the summer and at Christmas. There is also a museum shop and café on the site; the shop sells collectors items, jewelry, glassware, handicrafts, and other items relating to museum exhibitions, while the café serves a variety of pies and sweet pastries, including the popular Schjerfbeck pastry.

Close by EKTA visitors will find the redbrick Elverket building, once home to a power station, which has been converted to a cultural centre. Renovated by the Foundation for Swedish Culture in Finland, the building houses an office, a conservation studio and Gallery Elverket where art exhibitions are shown.

In addition to having splendid city parks, Ekenäs is also the gateway to the national park that bears its name in the archipelago off the coast. Visitors can explore the Ekenäs Archipelago National Park by taking a boat excursion to one of the main islands, or explore the numerous smaller islands and bays in a kayak or sailboat. On the mainland the Ekenäs Nature Centre provides information of the changing nature of the Baltic Sea, with exhibitions that allow visitors to listen to underwater sounds, explore an old fisherman’s hut, search for invasive species in a dry aquarium, and to learn about life in the coastal wetlands.

Known to locals as Källviken, Dagmar Park is a 40 hectare nature conservation area that has long been a popular destination for locals, especially families taking a picnic. The park was named after the Danish-born princess, and wife of Tsar Alexander III, Dagmar, as it was her favourite place to vacation. In the centre of the park there is also a spring named after the princess, with water so pure you can drink straight from it. The spring flows down to sea at Källviken, right beside one of the areas popular swimming and bathing beaches.

The Västerby outdoor recreation area is perfect for trekking and orienteering, while birdwatchers can head to Läppträsket in Karis, which is also of great interest to history buffs as there are artifacts from the Iron Age there.

Around a kilometre from the town centre the Ramsholmen Forest Park occupies 55 hectares, and boasts such diverse flora and fauna that is seldom found elsewhere in Finland.


For visitors intending to spend a little longer in Ekenäs, there are plenty of accommodation options available. These include 3 hotels, a choice of rental apartments, cottages and cabins, as well as camping and caravan facilities. The town also has a number of fine restaurants and cafés, including the picturesque Café Gamla Stan located in the wooden Old Town.

How To Get There

There are regular bus and rail services connecting Helsinki and Turku, and Ekenäs is approximately halfway between the big cities. You can alight at Tammisaari Asema if traveling by rail, or alight at Tammisaari (Ekenäs) or Karjaa if traveling by bus. For those driving, take the coastal route on Route 51 until it meets Highway 25 at Lärkkulla, then follow 25 south to Ekenäs.

Click here for detailed informatin how to arrive to Ekenäs >>