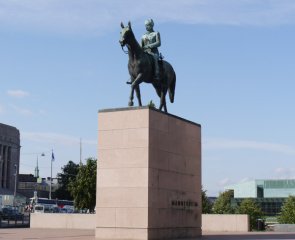 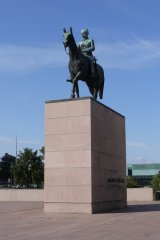 Baron Carl Gustav Emil Mannerheim (1867-1951) was the Marshal of Finland, Protector (1918-19) and President of the Republic (1944-46). Mannerheim’s achievements as a soldier and a statesman have made him one of the most influental figures of the 20th century in Finnish history. The idea of a statue of Mannerheim riding his horse was proposed already in the 1930s but the first attempts to realize the proposal never succeeded. The idea resurfaced after Mannerheim’s death, and in 1952 a competition was arranged to find a sculptor. The first stage of the competition was completed in 1954. Following two further stages, the memorial statue was commissioned from Aimo Tukiainen (1917-1996).